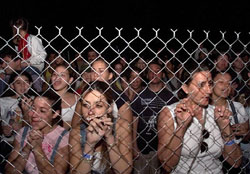 A ruling in a class action lawsuit brought by *NSYNC fans who missed most, if not all, of the group's August 1, 2000 concert at the Route 66 Raceway in Joliet, Illinois, may prove significant for concertgoers who have trouble accessing venues without adequate traffic control and parking, according to the law firm of Krislov & Associates, who represent the plantiff, and issued the following statement:

The Circuit Court of Cook County, Illinois (Hon. Lester D. Foreman) has upheld a breach of contract claim brought last year by concertgoers who could not access the venue for the concert.

The plaintiff, a resident of Northbrook, Ill., claims that it took her more than five hours to reach the venue, with her 11-year old daughter and friends in tow, because the site was ill-equipped to handle the crowd estimated at 60,000. Specifically, the plaintiff claims that unpaved parking lots, inadequate traffic control, narrow access roads and the venue's design caused her, and thousands of other fans, to miss most or all of *NSYNC's performance. Law enforcement personnel acknowledged that it took more than three hours just for patrons to get out of the Route 66 facility after the show was over.

In a decision that could enable patrons of concerts and sporting events to sue promoters, venues and event organizers for similar problems, Judge Foreman ruled that the obligation of the ticket seller does not end at the ticket window, rejecting the notion that a ticket is merely a "claim check" to a seat, noting that the event's organizers must be fair to fans who it knows may have trouble reaching the venue:

These are not desert island displays to which patrons are required to traverse inordinate courses irrespective of impediments in order to get what the ticket purportedly offers.

The court placed the obligation on organizers to evaluate the feasibility of a large event in relation to the performance site and available accommodations:

The seller and those associated with the seller are required to investigate and evaluate the location of the performance site in relation to its position in consideration of the massive attendees, the vastness of their number, and the accommodations being provided both inside and outside the venue.

The court concluded that there is a contractual obligation on the part of the ticket seller to make any information it may have regarding possible difficulty accessing the venue available to the purchaser.

The plaintiff's attorney, Clinton Krislov, said, "Rock fans have a right to be treated fairly and decently, with reasonable access so they can enjoy the concerts they're charged so much for."