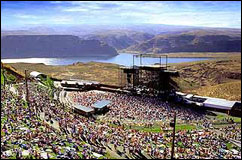 GEORGE, Washington (CelebrityAccess MediaWire) — Bill Parsons has been released from his position as General Manager at the Gorge Amphitheater as part of a "budget-cutting decision" by Live Nation, which owns the venue.

Its not just at the Gorge. A number of general managers at western Live Nation sheds have been released in recent weeks, including Molly Zidow at the White River Amphitheatre near in Washington State and Trevor Ralph, formerly of the Sleep Train who's reportedly moved on the Verizon Wireless Amphitheater at Encore Park in Atlanta. Staff at the affected venues report that Matt Preishoff, GM at Live Nation's Shoreline Amphitheatre is filling in as the interim go-to man until a new general manager can be appointed.

For Parsons, after a 14 year tenure, the parting with the Gorge is bittersweet.

"Obviously, I put in a lot of time there, and built great relationships, and I hope to maintain that," he told the Columbia Basin Herald. "I'm not leaving the area right now and the Quincy area especially. I'm in the Rotary club and supported a lot of school activities. That was very gratifying to me, as well as seeing so many kids develop, that just got their first-time employment at the Gorge. To see them grow up there was just very satisfying." – CelebrityAccess Staff Writers