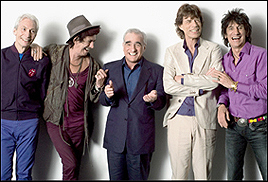 LOS ANGELES, CA (CelebrityAccess MediaWire) — Director Martin Scorsese jumped at the chance to direct Rolling Stones documentary Shine A Light, because the band's music acted as a soundtrack to his life.
The 65-year-old moviemaker admits the rockers' songs helped him through difficult periods in his lifetime, and the group influenced his own work so much he immediately signed up to work on the concert documentary.

He tells the New York Daily News, "At different times in my life, the Rolling Stones' music dealt with different aspects of my life that I was trying to make sense of.
"Their music has stayed with me and been a very important part of my life over the years." Shine A Light, which had its New York premiere on Sunday March 30th originally debuted at the Berlin Film Festival in Germany in February 2008. –by CelebrityAccess Staff Writers