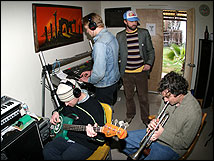 (CelebrityAccess MediaWire) — Virgin Entertainment Group and Integrate Marketing are proud to announce the second annual Virgin College Mega Tour (VCMT), presented by Dentyne Fire & Dentyne Ice. Headlining the 20-market tour this year is multi-platinum recording artist CAKE. The 2005 tour will feature British rock quintet Gomez as well. VCMT will also feature a daytime village on campuses that will include an “emerging artist” stage, karaoke booth, contest give-a-ways and the latest games, new product demonstrations and gadgets for the college market. The key sponsors and artists are in place for this year’s tour, but there are still opportunities to get involved – see contact information below for sponsor and booking inquiries.

CAKE is currently promoting the second single “Wheels” off of their fifth self-produced release, Pressure Chief (Columbia Records). Released October 5, Pressure Chief notched a Top 20 debut, marking both the highest debut and chart position to date for the multi-platinum band, and spawned the driving hit single “No Phone.” Pressure Chief has been met with critical praise for its signature match of "post-new wave with smart lyrics," according to the New York Times. CAKE has been a fixture on the airwaves since last fall, with highlights ranging from performances on the Tonight Show and the Late Late Show to an in-depth interview with singer/guitarist John McCrea and Michelle Norris on NPR’s “All Things Considered.” On the heels of their acclaimed fourth LP, Split The Difference, Gomez recently wrapped up a west coast tour as a precursor to the Virgin College Mega Tour. Gomez's 1998 debut won the UK's prestigious Mercury Music Prize, and they have since developed a rabid international fan base, performing at Bonnaroo as well as appearing on CBS's The Late Late Show and NBC's Last Call with Carson Daly.

With the return of key sponsors and the inclusion of artists such as CAKE and Gomez, the Virgin College Mega Tour promises to be an even bigger hit on campus in 2005. “Building on the success of last year, where we reached over 50,000 college students on 19 college campuses, we felt we could take the tour to another level in 2005,” says Martin Berman, of Integrate Marketing. “This year we already have two acts booked that are really hot with the college audience and we will have an exciting daytime lineup of activities including more live music and fun and games in our sponsor village. It’s a tremendous opportunity for Virgin, Dentyne and other brands that want to make a mark with college students.” –by CelebrityAccess Staff Writers