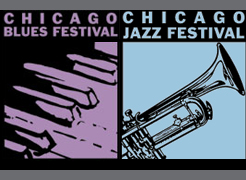 CHICAGO (CelebrityAccess MediaWire) — The city of Chicago has announced that the The Chicago Blues and Jazz Fests will both be reduced from four to three days and will feature fewer stages than in previous years as the result deep spending cuts in Chicago's annual budget for 2009.

"To be frank, we simply cannot continue moving forward with programs, events and festivals that cost the city of Chicago more to operate than we bring in in revenue." Megan McDonald, executive director of the Mayor’s Office of Special Events wrote in a statement to the Chicago City Council.

Last year's Chicago Blues Fest is a major event in the city and last year, drew more than 750,000 people to the event over the course of 4 days. The Blues fest is held in June, while the Jazz fest runs over labor day weekend. Both events feature free admission and are known to draw some of the top name performers in their respective genres to perform at the festivals.

The cuts aren't limited to the jazz and blues festivals the Viva Latin Music Festival & Celtic Fest have also been reduced from two to one day, the Chicago Sun-Times reported. McDonald also warned that further reductions may be pending still and that event "footprints" would be "condensed" as reviews were undertaken to find further operational changes to reduce costs. – CelebrityAccess Staff Writers