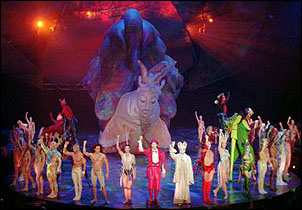 (CelebrityAccess News Service) – Celebrating 10 years in Las Vegas, Cirque du Soleil, which now totals three resident productions, has become a mainstay attraction on the strip. The company launched its first resident and cornerstone show, Mystere, in December 1993, which was presented in a custom-built theatre at Treasure Island in Las Vegas. To this day it has been credited with changing the face of entertainment in Las Vegas.

The success of Mystere led to the opening of a second Cirque du Soleil show in Las Vegas in October 1998– "O(R)", the awe-inspiring aquatic production at Bellagio. This was no small endeavor, as the 15,000 square foot stage can be transformed from a dry platform into a pool filled with 1.5 million gallons of water in a matter of seconds. The 85 performers that make "O" come to life present jaw-dropping acts above, on and in the water.

In September 2003, Zumanity premiered at New York-New York Hotel & Casino, venturing into the uncharted waters of eroticism and sensuality.

In all, Cirque du Soleil has presented more than 7,200 performances in Las Vegas to nearly 10 million spectators. The three resident shows play to sold out audiences 10 times a week and features 210 performers from over 30 countries around the world, not to mention 400 crew and support staff members.

Cirque du Soleil's presence in Las Vegas has been firmly established, and in July 2002, the company relocated its new headquarters there, employing 75 people from finance, human resources, marketing and public relations, information technologies and general management.

A fourth resident show will establish itself at the MGM Grand in 2004. – Bob Grossweiner and Jane Cohen