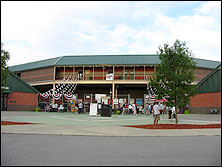 Jeune filed the suit against the town, county, Chamber of Commerce, and the Beacon school district, which owns the land where the stadium is located, naming the former chamber president Elizabeth Coleman and Fishkill town Building and Fire Inspector George J. McGann as defendants.

Jeune’s attorney, James Monroe, said that Jeune claims that Coleman and McGann “worked together to prevent this promoter from bringing this type of ethnic music to the stadium,” according to the Poughkeepsie Journal.

Monroe contended the promoter had secured the proper approvals from the chamber, including obtaining the necessary insurance coverage, for the planned Sept. 24 concert. He said the suit alleges Coleman and McGann then misled the Fishkill town board into believing the required approvals had not been granted, leading the board to deny a permit.

“They took affirmative action to prevent the performance of this specific type of music,” Monroe told the paper.

Fishkill Supervisor Joan Pagones denies Monroe’s assertions. She said town board members denied the permit because promoters were unable to display a signed contract for the event.

“I remember asking them if they could go to [the chamber] office and bring it back…that we’d be in session for a while,” the supervisor told the paper. “They left and never came back.”

Monroe said he had information that Coleman had prevented other hip hop concerts from being held at the stadium, but declined to elaborate on the allegation.

The suit says that Prezidency Corp. is seeking “compensatory and punitive damages for the violation of their rights in amounts to be determined by the Court.” –by CelebrityAccess Staff Writers