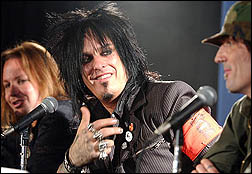 (CelebrityAccess Media Wire) — Motley Crue's "Red, White & Crue World Tour 2005 … Better Live Than Dead," kicking off February 14, is turning out to be one of the hottest tickets around, with the initial 25 dates selling quickly and fans petitioning to have Motley Crue perform live in their city. Fans are continuing to show their support by campaigning through the internet and radio to "Bring The Crue" to their city.

Ryan Patrick, program director of KAZR-LAZER 103.3, in Des Moines said, "The people have spoken…you can tell by the phones and by the petition. Motley Crue truly are men among the boys. They've done it once, now they are back to show everyone how to do it again."

The petitions he's referring to are popping up all over the internet while being fueled by local radio stations in towns from Spokane, WA to Jacksonville, FL (currently there are "Bring The Crue" campaigns in scores of cities) with thousands of signatures from fans begging Motley to bring the show to them. Letters such as this from a "Motley Crue Fan" can be found on the websites:

"I am writing this letter on behalf of many thousands of your fans. We are pleased to hear the official announcement that Motley Crue will be touring America and Canada again. However, it is to our deepest disappointment that there are no shows in our immediate area. It is our belief that if this will be the final tour all the original members do, then we feel Motley Crue should not be skipping over our town, for there are thousands of Motley Crue fans here that have been patiently waiting for this tour for years. My town is a great town full of tons of metal and specifically Motley fans. We would love for Motley Crue to come and play for us. Please think of the fans, we are certain that it would definitely sell out. Thank you for your time."

"As soon as the initial tickets went on sale for the tour, we got offers for 70 more cities," said Allen Kovac, CEO of 10th Street Entertainment, Motley Crue's management company, "but we can only schedule 25 shows because of our European schedule so Motley Crue will let the fans decide where they are going." On New Year's Eve, Motley Crue will perform live and make a special announcement on "The Tonight Show With Jay Leno."

The Motley Crue Reunion was initially fueled by the diligent efforts of Mags Revell, a UK promoter with Metropolis Music Group, who launched his own grass-roots campaign in the UK designed to get the band to reunite. Taking the unprecedented steps of placing advertising in UK media and putting a hold on concert venues in the UK for June 2005, Revell's efforts quickly gained the attention with fans all across the world who added fuel to the fire by taking to the internet and spreading the word.

Following the announcement of dates in Toronto and Ottawa, fans from Winnipeg, Calgary, Edmonton, Vancouver, London and Montreal, with the on-air support from local radio stations, began their own "Bring The Crue" petitions. Krista Blahut, the originator of the "Bring The Crue" campaign in Winnipeg said, "We feel that Motley Crue should not be skipping over almost all of Canada, for there are thousands of fans here that have been patiently waiting for this tour for years."

"We refuse to let this band skip our city," said Lochilin Cross, program director. "A band like Motley Crue is going to make an emotional connection for a lot of people." The campaign took on so much fervor that Canadian broadcaster CBC ran a story about it on its news show over the past weekend. According to a representative from the band's management company, the band will make an announcement on additional Canadian dates next week.

This frenzy all began on December 6 when all four original Motley Crue members announced that they were reuniting for the first time in more than six years to embark on a world tour and releasing an anthology album "Red, White & Crue." The event took place at the Hollywood Palladium where 1,000-plus people showed up to see the Crue together again. Although it was a "secret" concert, fans and media packed the Palladium to capacity and hundreds were left outside in the parking lot and street trying to catch a glimpse of Motley Crue. The announcement was originally planned to take place in West Hollywood at the Whiskey A Go-Go but several days before the event, the city decided Motley Crue could not hold a press conference there and the L.A. Fire Marshall prohibited the band from landing their helicopter (already approved by the FAA) at the Palladium and then again for the band's appearance on "Jimmy Kimmel Live."

North American cities that have initiated "Bring The Crue" campaigns include: