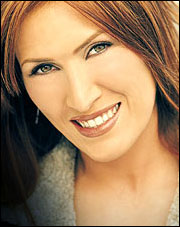 (CelebrityAccess News Service) – Despite the August 14 blackout that plagued the Northeast and Midwest, Jo Dee Messina is a living example of the entertainment maxim, "the show must go on."

Messina was scheduled to perform at the Oneida Indian Nation’s Turning Stone Casino Resort on August 14, and hundreds of ticket-holders waited in the emergency-lit lobby for hours on the chance that electricity would be restored in time for the 8 p.m. concert. The power outage occurred at 4 pm.

“We talked to her manager and her road crew, and their plan was to wait right up until 8 o’clock in case we got power back,” said Sam Madonia, director of the resort’s Entertainment Department. “When that didn’t happen, Jo Dee Messina said she wanted to perform anyway because all these people had come to see her.”

The original idea was for Messina to perform an acoustic concert on the Showroom stage. But the resort’s generators do not provide emergency lighting for the Showroom, creating safety concerns, so the audience was moved into the lobby and a piano was wheeled out.

“Her whole band came out,” Madonia said. “They had acoustic guitars, and the drummer had some maracas, and Jo Dee played the piano. They performed for about half an hour in the heat, and the crowd was great. They really appreciated the effort she made to make up for the inconvenience.”

During her half-hour performance, Messina fielded questions from a crowd of about 350 people.

“I’ve been doing this for 25 years, and this was a first,” Madonia said. “Everybody – the Showroom staff, her crew, the box office staff, security – everybody pitched in and worked together to bring this off. Even Jo Dee said she had never seen any place where so many people wanted to put a show on in these circumstances.”

Messina's regular concert has been rescheduled for Sept. 5, and tickets for her August 14
performance will be honored.–by Jane Cohen and Bob Grossweiner