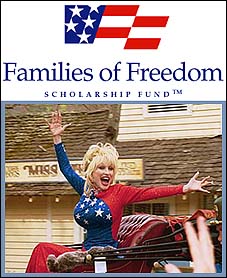 Dolly Parton is staging a New Year's Eve benefit concert, "The Red, White and Bluegrass Concert," at Nashville's Grand Ole Opry House to aid the Families of Freedom Scholarship Fund. Former President Bill Clinton and former Senate Majority Leader Bob Dole are spearheading a $100 million fundraising campaign for the fund, which will provide scholarships to financially needy children and spouses of the victims killed or disabled in the Sept. 11 terrorist attacks.

Backed by an all-star acoustic band, Parton will perform and act as emcee for the evening's performances. Artists will be announced at a later date. "We are trying to gather some of the greatest talent from the bluegrass and roots music community," Parton said. "I would like to do a series of concerts throughout the year in order to make this an on-going program to raise money for something so worthy."

The Families of Freedom Scholarship Fund will be coordinated and administered by the Citizens' Scholarship Foundation of America, the nation's largest nonprofit administrator of private scholarship programs, based in St. Peter and Minneapolis, Minn.