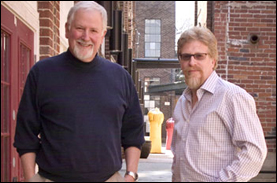 Tim DuBois has long experience in the industry, serving a tenure as a manager with Fitzgerald Hartley, as president of Arist Nashville and a senior partner at Universal South. He was instrumental in the careers of a number of major artists, including Alan Jackson, Brooks & Dunn, Diamond Rio, and Brad Paisley.

"I am very proud to be working with this great staff again" says DuBois, "The music industry is changing rapidly and the need for creative, proactive management has never been greater. I look forward to helping define and develop new pathways to reach tomorrow's music fans, showcasing our diverse artist roster and the great music they make.

Marc Dottore has been a manager for more than a decade, working with Bob Titley and Clarence Spalding at Titley-Spalding and TBA Entertainment. In 2005, he joined DuBois at Universal South's newly-formed artist management operation.

"I am very excited to have the chance to reestablish my partnership with Tim. He is not only one of the most respected and connected guys in town, he has a real passion for music and for developing long-term careers."