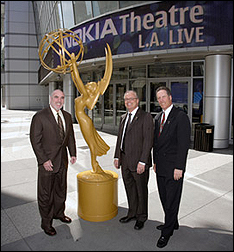 Nokia Theatre L.A. Live will be the new home of the Primetime Emmy Awards beginning with the 60th Primetime Emmy Awards national telecast scheduled for September 21st it was announced by Timothy J. Leiweke, President & CEO, AEG, owners and operators of Nokia Theatre L.A. Live and John Shaffner, Chairman & CEO, Board of Governors, Academy of Television Arts & Sciences. Financial terms of the ten-year agreement were not disclosed.

The multi-faceted agreement between AEG and the Television Academy will additionally place the Academy's 2008 Creative Arts Emmy Show the preceding weekend on Saturday, September 13, at the new 7,100-seat theatre located across from Staples Center within the L.A. Live sports and entertainment district. The agreement also calls for the 2008 Creative Arts and Governor's Balls to be held at the Los Angeles Convention Center which is adjacent to L.A. Live.

"We are very excited to be moving to this new state-of-the-art facility for out landmark 60th Primetime Emmy telecast," said Shaffner.

It is anticipated that the various venues within the 4 million sf./18 acre L.A. Live will host other programming and ancillary public and private Emmy events during 'Primetime Emmy Week' as well as, and throughout the year.

"Having the Primetime Emmy Awards as an 'anchor tenant' for L.A. Live has been one our highest priorities throughout the development of L.A. Live," said Leiweke. "While Nokia Theatre L.A. Live will provide the very best technical elements available in any venue anywhere, the overall environment and atmosphere that the Academy will activate and create throughout the entire district will further establish the Primetime Emmys as one of the industry's most respected and important awards shows and one that now is guaranteed to be in Los Angeles for the next decade. Thank you to John Shaffner, Frank Kohler and the board of directors for your vision and your commitment. We won't let you down." – CelebrityAccess Staff Writers