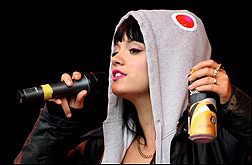 LONDON (VIP) — Lily Allen has pulled out of the Isle Of Wight festival. Reports of the star being treated for depression emerged during the week.

Now Isle Of Wight festival organiser John Giddings has explained that a representative for Allen recently told him that the singer would not be attending the festival.

"It's true, they have said she's not coming," Giddings told Efestivals.co.uk. "They said that she hasn't delivered her record, and I said I haven't booked a record, I've booked an artist.

"I think the poor girl has got a few problems. Unfortunately England, although it produces good girl singer/songwriters, they don't seem to be capable of running the course.

"I find it very disappointing. These artists don't seem to have a responsibility to their audience. Morrissey pulled out two weeks before the festival [in 2005], claiming he was never booked, and he told us he didn't have a drummer.

"I offered him Phil Collins and he still said he wouldn't do it, but Travis replaced him and they were absolutely phenomenal."

He added: "It's a good job she (Allen) pulled out now and not the day before. I wish her the best I hope she sorts herself out."

The Isle Of Wight Festival takes place between June 13 and 15.