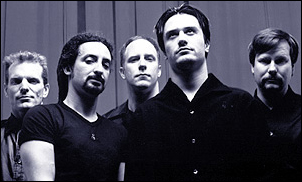 LONDON (VIP-NEWS) — Faith No More has announced its first live performances since splitting up in 1998. The band will play a series of European festival dates this summer, according to a statement from frontman Mike Patton's publicist.

No North American Faith No More dates are scheduled at this time. As previously reported, only Patton and frequent collaborator Rahzel will perform at Coachella Valley Music & Arts Festival in April, despite speculation about a Faith No More appearance.

Neither the lineup for the revived Faith No More nor the specific festival dates have been announced. No further details on the band are available yet, according to Patton's representative.

The news of Faith No More's reunion comes as Patton completes his first film score, for "Crank 2: High Voltage," which will hit theaters on April 17.

Patton and beatboxer Rahzel, meanwhile, have worked on an album that has not yet been officially released.

Faith No More's biggest single, "Epic," reached No. 9 on the Hot 100 in 1990. "Midlife Crisis" earned the band the top spot on the Modern Rock Tracks chart in 1992. According to Billboard