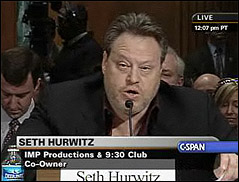 "The message I want to leave you with today is that the music business is in far worse shape that most people realize. We cannot keep doing things that no longer work. This merger will allow the live music industry to avoid repeating the mistakes of the record business," Azoff said.

Rapino and Azoff said that they believe competition still exists today in every aspect of their business and will continue undiminished after the merger.

"Our business model rises or falls on our ability to serve the artists. If others can do it better, the artists will go elsewhere. We welcome competition. Every service we offer today faces aggressive competition and that competition will continue — and likely increase — long after this merger is complete," Rapino said.

Despite these assurances, Messrs. Azoff and Rapino seemed to be facing an uphill battle in finding support from the committee, who seemed largely skeptical of the public utility of the proposed merger.

Committee chair, Senator Herb Kohl described the outcome as a "stranglehold on all segments of the concert business" while Senator Chuck Schumer told the witnesses that the merger was "monopolistic behavior plain and simple."

Schumer made particular issue out of Ticketmaster's acquisition of secondary ticket market website Ticketsnow.com and asked rather pointedly, if Ticketmaster was considering divesting themselves of the company. With quick wit, Azoff responded by asking Sen. Schumer if he was interested in tendering an offer on the company, however Schumer declined, citing financial restraints.

Senator Schumer also expressed skepticism at Mr. Azoff's explanation that the recent Ticketmaster Springsteen ticketing snafu was the result of a "computer glitch" and intimated that it may have been intentional.

"[It] seems to be much more about money-making than about malfunction." Schumer said.

Further compounding matters for the Live Nation/Ticketmaster contingent were IMP's Seth Hurwitz and Jam Production's Jerry Mickelson, both competitors of Live Nation who had been invited to testify. Both men were quite candid in expressing their views of the proposed deal with Hurwitz telling the committee that:

"The next step towards trying to control the industry is to control the ticketing. It won't work either but, in its wake, will leave yet another trail of broken competitors and bad economics."

Mickelson was equally dire, "It is my belief this merger is vertical integration on steroids" he told the committee.

Both Mickelson and Hurwitz made the point that a merger between Live Nation and Ticketmaster would expose sensitive business information from their business relationship with Ticketmaster to their largest rival, Live Nation. Mr. Rapino responded to this concern, and while he declined to characterize the barrier as a "firewall" he did state that he believed there would be separation between the ticket-selling and concert promotion divisions of the post-merger firm.

"A dominant firm cannot use acquisitions, such as this one, to preserve its monopoly power," Balto told the Committee "[Ticketmater] is trying to buy its rival out of the market."

Perhaps the most telling moment of entire afternoon came after the hearing had been gaveled to a close when Jerry Mickelson felt compelled to lean in and tell Azoff "Irving, this has got nothing to do with you."

Here are links to the full video of this fascinating hearing and texts of the full opening statements of all of the witnesses.