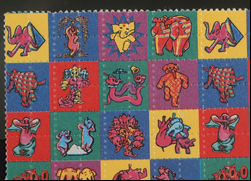 SCHENECTADY (CelebrityAccess MediaWire) — An Oregon man was arrested over the weekend at the Camp Bisco Music Festival after police found him allegedly in possession of 14,000 hits of acid and $17,000 in cash.

According to local NBC affiliate News 13, the man, Jonathan Taylor has been charged with three counts of criminal possession of a controlled substance, two of which were felony beefs.

"We're not sure how he got it over the check points, but he did. That's why security is here to ride around and the attendees too. They come here to have a good time. They don't need that kind of stuff," Bill Potter one of the event's organizers told New13.

According to Potter, some alert concert-goers tipped off festival security that something fishy was afoot.

"We went down. When we found him he had these little things, what looked like papers, looked like art work. Come to find out they were acid," Potter said.

Police subsequently checked Taylor's vehicle and discovered what they allege to be a cache of money and LSD. Taylor is being held without bail at the Schenectady County Jail. – CelebrityAccess Staff Writers