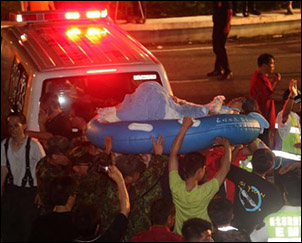 TAIWAN, China (CelebrityAccess) — A horrific fire during a concert at a a Taiwan water park left more than 500 people injured, including eight in critical condition, authorities said.

According to Al Jazeera, the fire at the Color Play Asia event at the Formosa Fun Coast water park started when a cloud of colored theatrical powder was sprayed from stage into a crowd of about 1,000 people and ignited.

A video of the incident showed the cloud turn into a ball of fire, followed by a blaze quickly spreading as the crowd fled.

Lee Lih-jong, deputy chief of the health bureau of the New Taipei City government, said 509 people had been injured, with 188 of them seriously hurt.

"Our initial understanding is this explosion and fire … was caused by the powder spray. It could have been due to the heat of the lights on the stage," a spokesperson for the New Taipei City fire department told Al Jazeera.

Taiwanese authorities have arrested at least five people in connection with the fire, including park workers and technicians. They may face charges of charges of professional negligence causing serious injuries and endangering the public, police told Taiwan's Central News Agency. – Staff Writers

Here's a video of the fire. Please note that it is quite graphic.