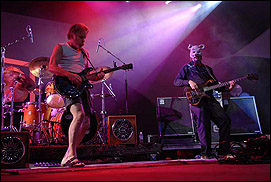 BRIDGEPORT, CT (CelebrityAccess MediaWire) — Gathering of the Vibes, one of the Northeast's premier summer festival destinations is taking shape for 2008.

Set to take place from July 31st to August 3rd, the event will be held once again in scenic Seaside Park in Bridgeport, Connecticut.

The festival will also feature camping accommodations, food and craft vendors, a non-profit village dedicated to organizations involved in social, political or environmental activism and of course, a taper's section.

Originally conceived in 1996 by Ken Hays, who at that time ran Terrapin Tapes, a distribution outlet for Greatful Dead live concert tapers and traders. Jerry Garcia had just passed and Ken organized a memorial event entitled: "Deadhead Heaven – A Gathering of the Tribe." The event has been held annually since then in various locations around the northeast before returning once more to Bridgeport where it looks like the event will make its home there for the foreseeable future as The City of Bridgeport and Gathering of the Vibes have finalized an agreement to hold the festival at Seaside Park for the next five years, through summer 2012.

Tickets are available now, for more information, check them out on the web here. – CelebrityAccess Staff Writers