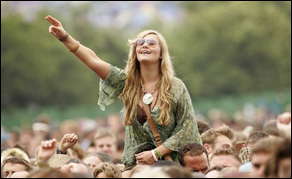 It is likely to be the first time for 15 years that Glasto has not sold out in advance.

Organisers have blamed the mud in recent years for putting people off, while some fans have complained about the line-up, headed by rapper Jay-Z.

Organiser Michael Eavis said: "There's a lot at stake. We really do need a good year this year, that's for sure."

A total of 137,500 tickets went on sale in April. Last year, the same allocation sold out in one hour and 45 minutes.

"There were about 3,000 left this morning," Mr Eavis told the BBC News website on Tuesday.

"But they are going out slowly. We did about 800 yesterday so we'll just about scrape home without losing my shirt."

Mr Eavis said the charities that receive money from the festival – Water Aid, Oxfam and Greenpeace – were likely to lose out as a result of any unsold tickets and the rising cost of staging the event.

"The costs have gone up such a lot since we set the [ticket] price," Mr Eavis said. "The diesel cost has gone up by £160,000 for the generators and all the tractors."

The event aims to give £2m to the charities every year.

"The charity money will have to be reduced, I think," he said. "We've got £1m going to charity already, but it's the second million that's the problem if we don't sell out."

Fans will start arriving at the site from 0800 BST on Wednesday, before the music starts on the main stages on Friday.

Mr Eavis, who founded the festival on his farm 38 years ago, said he was most looking forward to Amy Winehouse's appearance on Saturday, which was "finally confirmed".

But this year has seen controversy over the choice of Jay-Z to top the bill on Saturday.

Oasis star Noel Gallagher said it was "wrong" for the event to have a hip-hop headliner.

But Mr Eavis responded: "I'm thrilled about it. I think it's going to be an absolutely brilliant evening."

The festival had been the victim of the "great British tradition is of kicking down the people who are at the top of their game", he added.

"We're at the top of our game, or we have been. So we're sitting targets for criticism.

"It's quite natural that we should get a kicking and for some reasons we probably needed it. I'm proving this year that we're going to bounce back and it's going to be a vintage Glastonbury year.

"There's a lot at stake. We really do need a good year this year, that's for sure, with the weather and everything."