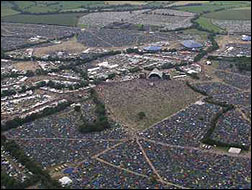 The Glastonbury Festival is set to return after organisers convinced local authorities about new safety measures.

Organiser Michael Eavis was fined £6,000 in 2000 after 200,000 people attended the festival — double the official number of music-goers licensed to attend.

But organisers have been given an entertainment licence for 2002 after they managed to reassure the local council that new safety measures will be installed, such as extra lighting, CCTV cameras and higher fencing.

The festival, which is held at Worthy Farm in Pilton, Somerset, is planned for June 28, 29 and 30, and is rumoured to feature Rod Stewart and Pink Floyd.

Eavis was granted a licence after a six-hour meeting with Mendip District Council's regulatory board on Thursday for a crowd of 140,000 to cover the costs of the extra security measures needed to control numbers.

On gaining the licence, Eavis said: "We have been working on this for over a year and are all very pleased and have a lot of work to do now.

"People should not come without a ticket — we have to plead with people not to come along unless they do.

"It's a make or break thing for us, but we really do have to make it work this year. We've got a full team of energetic people that really want to make it work and people with a great track record, so we are confident that we can do it."

But police did raise serious concerns about how some of the promises in the application would be delivered and how non-ticket holders would be dissuaded from attending.

Chief Superintendent John Buckley said: "The crucial question is whether they can deliver the proposals. I'm not convinced they can. Our force is small and we may have trouble policing the event due to operational commitments."

The force predicted that recorded crime will increase by 30% in the financial year 2002/3 as a result of the festival. The site will be surrounded by a overhanging 3.6 metre fence with extra security staff deployed on the fence line, gates, pits, and off site. A total of 663 security and 610 regular staff will be deployed.

Floodlighting will be used as well as 12 CCTV cameras, six watchtowers and car park surveillance.

All visitors will be issued with advice packs, there will be secure storage for property and camping areas will be illuminated.