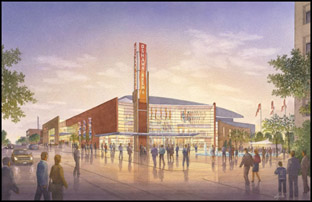 OSHAWA, CANADA (CelebrityAccess MediaWire) — — The numbers are finally in.

According to News Durham’s “Oshawa This Week” Oshawa's new arena will be named the General Motors Centre, officials from Maple Leaf Sports and Entertainment (MLSE) and General Motors Canada refused to provide specifics on the naming rights agreement, despite the fact similar information is readily available for facilities across Canada.

Oshawa This Week has since obtained confidential documents that detail the terms of the agreement.

In a Sept. 14 letter to City Manager Bob Duignan, MLSE Vice President of Venues and Entertainment Bob Hunter outlines the agreement, which is based on a 10-year term with an annual value of $75,000 in cash rights for the first five years and $80,000 for the second five years.

"Our calculations have determined that given the signage inventory, annual suite licence and free building use that we negotiated out of the original titling sponsorship package, that we have annually $87,200 of additional inventory to sell on behalf of the City," Mr. Hunter states in his letter. "In other words, the titling package has a real value of over $160K per year."

Council voted on Sept. 29 to endorse the agreement and allocate the total net annual revenue from the naming rights to debt management and capital reserve.

According to a staff report, it is not possible to use the revenue to make payments on the outstanding principle, because the City's debentures are for fixed 10- and 20-year terms, with fixed payment schedules.

Staff recommended the annual $160,000 go to debt management and capital reserve, an account established to manage and avoid City debt.