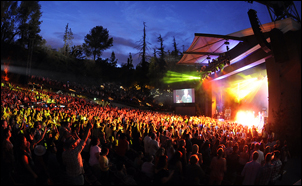 LOS ANGELES (CelebrityAccess) — The battle to determine who will manage the iconic Greek Theatre in Los Angeles remains undecided after a city commission failed to choose an operator for the venue.

Nederlander has operated the Greek since the 1970s, but their contract is up next year and Live Nation has submitted a slightly higher bid to manage the theater and Park officials and a consultant firm handling the selection process earlier this month both recommended that the city retain Live Nation as the new operator for the venue.

However, Nederlander and their partners AEG Live have mounted an aggressive grass-roots based campaign in the local community and the media to retain management of the theater, and after two meetings, the Los Angeles Board of Recreation and Parks has been unable to settle on a bid.

According to the Los Angeles Times, Live Nation says it will guarantee $60 million in revenue to the city over two decades, while Nederlander-AEG offered a guarantee of $77 million. Live Nation also offered more money for upgrades at The Greek as well, pledging to spend $40 million against Nederlander/AEG's promised $19 million, which Live Nation's rep characterized as "band aids."

Nederlander and AEG contended that choosing Live Nation for the venue would cost the city $17 million in guaranteed money and that the panel's recommendation of Live Nation failed to properly consider Nederland's investment on upgrades, maintenance and community engagement at the venue.

The Commission also heard from community members who expressed concerns that a change in the venue's management might lead to events at the theater being more intrusive to the community.

In the end, the Board of Recreation and Parks Commissioners were unable to muster the three votes required to move forward with contract negotiations with Live Nation and were forced to table the matter for two weeks. – Staff Writers