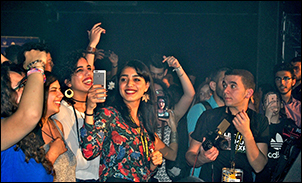 (CelebrityAccess) — After the success of the Palestine Music Expo (PMX) in 2017 and preceding next year’s event, co-founder of the expo, Rami Younis, and music journalist, Juliette Jagger, provide insight into what it is like to export Palestinian music and culture on an international scale and to the masses.

Last April, we had the great pleasure of organizing and participating in the first ever Palestine Music Expo (PMX). The historic event, which took place in the city of Ramallah, was the brainchild of UK music industry vet and founder of Cooking Vinyl Records, Martin Goldschmidt, musician and co-founder of Palestinian hip-hop group DAM, Mahmood Jrere, Palestinian producer and composer, Abed Hathout, and Palestinian journalist, Rami Younis. The idea first surfaced about a year ago in a bar in the city of Haifa, over a couple of beers.

So what is PMX? PMX was created as a space to support Palestinian music, establish a direct line of communication between Palestinian artists and the music industry abroad, and to foster an understanding that Palestinian music is not separate or even all that different from mainstream popular music as a whole.

“Palestine Music Expo provided Palestinian artists with an opportunity that is extremely rare,” says Suleiman Harb, vocalist for Palestinian rock band El Container. “For us, having international industry professionals come to Palestine to objectively listen to the music that is produced here is huge because it meant that any decisions to work together were based on whether the artist’s product was good enough to present to an international audience, rather than on sympathies toward the Palestinian cause. And, that is what every Palestinian artist wants. We want to be measured by the same scale as everyone else in the world, and we want to be looked at as equal.”

It is fair to say that on the world stage, Palestine isn’t exactly regarded as a hotbed for creative culture. But, the truth is, locally there is a roaring underground scene and artists from all sorts of different backgrounds are hard at work every single day. What they lack is the support of a sustainable cultural infrastructure, and that’s really what prompted Goldschmidt, Jrere, Hathout, and Younis, to make the decision to pool their resources and kick start one themselves. Using platforms like JustGiving and GoFundMe, they were able to raise 50 percent of the funds needed to produce PMX using crowdfunding alone.

“The breadth of support from the industry was inspiring,” says Goldschmidt, “and the great thing was that it came from across the board. We had the backing of the live and digital communities, independent labels, and artists alike. We had the support of famous names and names you haven’t yet heard of. What was especially touching was the support from the Jewish community inside the music industry. People really came together to make PMX possible.”

Over the course of the three-day event, which took place in Ramallah this past April, organizers paired an incredible group of local artists with 32 international delegates from countries including the United States, Canada, the United Kingdom, Brazil, Switzerland, France, and Zimbabwe, for a number of panel discussions, listening sessions, and riveting live performances. The PMX team even managed a live web link-up so that artists from behind the Gaza blockade could get in on the action. “PMX was so much more than I expected,” says Stephen Budd, Chairman of the UK’s Music Managers Forum. “It was a brilliantly put together line-up of special talent, showcased in a way that allowed us the chance to see them all at their best. The panels and workshops were also excellent –– I learned so much just being there.”

Sonically, rock and rap are the cornerstones of that scene, but elements of jazz, ska, pop, blues, and even desert rock can also be heard bumping up against each other with an incredible fervor. At the same time, Palestinian musicians are diligent in their quest to preserve the traditional folkloric songs and sounds of their ancestors, and many found a way to both update and incorporate them into their sets.

When the evening showcases began, we were all blown away. 21 artists performed for nearly 3,000 concertgoers, proving that given the opportunity, people will turn up. From the stage to the set changes, which were masterfully executed in under 8-minutes flat; something most professional crews can’t do––the production was world-class and most importantly homegrown.

Does the occupation currently hinder the ability of Palestinian musicians to record, tour freely within Palestine and between neighbouring regions, and perform in front of new audiences in various parts of the world? Absolutely. But, it is not what lies at the heart of the music itself, and that was a key message Palestinian organizers consistently drove home.

“Although we have unlimited appreciation for free beer and pizza,” jokes Apo Shapagian, lead singer of Apo and the Apostles, “it was the atmosphere, particularly backstage, during PMX that we considered priceless. To be around other local musicians whom we hadn’t yet had the chance to meet and to be in such a positive and carefree environment, that really enabled us to connect with other members of the community and give real-time feedback on each other’s performances … We spent hours talking over ideas with other musicians, and that act of getting together will result in future collaborations between local artists. We want to say thank you to PMX for that.”

Veteran agent and founder of UK-based independent music company Robomagic, Rob Hallett, described his experience at PMX as nothing less than “a revelation” … I never expected to find such a pool of international quality talent in such a small, troubled country,” he says. “Martin Luther King once said: ‘Darkness cannot drive out darkness, only light can do that. Hate cannot drive out hate, only love can do that.’ Music is the light of Palestine that will carry the burning embers of freedom across the wider world, and PMX is an important vehicle that can enable that … To also quote Leonard Cohen: ‘There is a crack in everything, that’s how the light gets in.’”

We live in a time when it is no longer cool to use the phrase “the power of music,” but quite frankly, on the ground in Ramallah during PMX 2017, the spirit of that sentiment was renewed. Looking out into the crowd each night, it was as if a caravan of superstars had made a tour stop in town. Everybody was present––arms up, punching through the smoke of a thousand cigarettes, and jumping, jumping, heeding the calls of the musicians on the stage. PMX 2017 will be remembered for the sense of community and optimism that it generated. There was an obvious camaraderie among the bands, locals, and foreign delegates alike, and a genuine sense of excitement in knowing that we all had just participated in something that has only just begun.

Throughout the year, PMX also provides mutual learning opportunities in which international experts can interact directly with Palestinian artists to assist with skill building, and enable them to contribute to the establishment of a Palestinian music industry. This kind of mentorship not only introduces Palestinian artists to various professional aspects of the music business, it helps them to realize that the business itself is not just about musicians and fans, but agents, record labels, copyright law, royalties, the digital community, social media, communications, logistics, night-time economies, the hotel industry and so much more.

Maram Kablawi, an aspiring music manager, recently travelled to the UK in association with PMX to work under the guidance of managers Rachel Willis and Pepe Jansz. "The PMX mentoring program has given me not only tools to work with, but something much bigger and that’s hope. I now know that I'm not alone or isolated and don’t feel as though I have to try to work it out all by myself––I feel connected to a community. I’ve met people who see my potential and believe in it. Those are, for me, reasons to make things happen.”

“PMX was life-changing for me,” says UK agent Beckie Sugden, who attended PMX 2017 and will attend PMX 2018 as well, “and that is one of the biggest understatements I have ever uttered. Not only did we get to see an incredible array of talent from all genres and talk to them about the ins and outs of the music industry, but we saw real results with several of the artists getting opportunities with agents, managers, record labels, and even slots on festivals as prominent as Glastonbury … Palestinian hospitality is truly unrivalled,” she adds. “I already miss the country. I feel I have made friends for life, and in fact, it almost feels like we’re a family. Though the PMX journey is just beginning, I for one cannot wait for the next edition so that we can continue what we have started.”

Immediate accomplishments included: a commitment from the Bank of Palestine to raise funds for a permanent Palestine Music Expo office (which will be dedicated to working year-round on building a local creative industry as well as assisting artists), and guaranteed support from the Grand Park Hotel in both Ramallah and Bethlehem for all future PMX events. The Abdel Mohsin Al-Qattan foundation, another PMX partner, has already committed their continued support for 2018’s event as well. Seven of the 21 artists that performed during this year’s PMX festivities also secured booking agents or offers to tour abroad while PMX’s partner, Manchester-based charitable organization, In Place of War, has built a brand new, fully-equipped recording studio in Nablus that adds real capacity to the region.

For all those involved in the organization of this event, particularly those who call Palestine home, it is still difficult to explain just how powerful an experience PMX 2017 really was. The energy was truly electric, so much so that Goldschmidt, Jrere, Hathout, and Younis are still trying to figure out how they pulled off such an impossible dream. “This first PMX brought two worlds together,” says veteran music industry journalist Larry LeBlanc. “It not only provided a fundamental platform for a future vibrant regional infrastructure, but I believe that it was a source of pride for the Palestinians themselves.”

To be frank, the current generation of Palestinians is sick and tired of traditional means of cultural resistance. These musicians, writers, and artists, have the same aspirations as everyone else and they’re just as hungry to be heard. Palestinian locals are hungry for world-class entertainment, and every single one of the foreign delegates we hosted was hungry not only to experience Palestinian talent, but to learn about the culture and the country so many artists call home. “I think it was that hunger that really propelled PMX forward,” says Abed Hathout, “and it is what will continue to drive us all throughout the year ahead. Our goal since day one has been to establish a sustainable independent cultural infrastructure on the ground in Palestine so that artists have a home base and a platform upon which to take their creations to the rest of the world.”