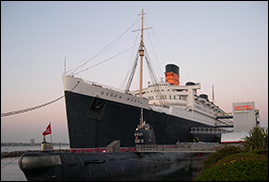 LONG BEACH, CA (CelebrityAccess) — Queen Mary former ocean liner turned museum attraction in Long Beach will be host to more live entertainment next year with a little help from the folks at Goldenvoice.

According to the Long Beach Press-Telegram, Queen Mary leaseholders Urban Commons has signed a contract with an option for a year extension with Goldenvoice that will see the promoter staging music festivals at the shoreside attraction.

The two year contract will see Goldenvoice exclusively operate the musical events at the Queen Mary, and while no official details have been announced, Dan Eisenstein, director of entertainment events for Urban Commons told the Press-Telegram the current plan will see three or four larger scale multi-day festivals outside the ship each year and as well as several smaller events staged onboard the ship.

This month marks the 50th anniversary of the Queen Mary's arrival at its current home in Long Beach and while the deal with Goldenvoice is new, concerts at the attraction are not. Since arriving in 1967, the ship has hosted performances by everyone from the Beach Boys to the Wu-Tang Clan.

The ship itself can only host about 4,000 people for concerts aboard, but the waterfront area adjacent to the ship can accommodate up to 15,000 people, the Press-Telegram said.