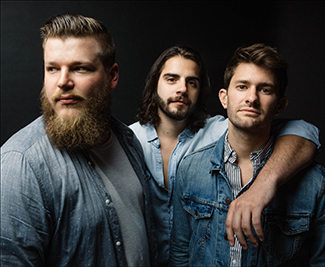 An intensely personal song, "Friends" is the second single from the recently released EP, Far From Home, on Entertainment One. Produced by Ryan Hadlock, renowned for his work with The Lumineers, Brandi Carlile and Vance Joy, Far From Home offers a compelling distillation of the Brooklyn-by-way-of-Baltimore trio's "amazing roots rock [with] sweet melodies that really shine" (Huffington Post), and ranges from the infectiousness of "Caroline" to the introspective warmth of "Friends" to the bittersweet buoyancy of "Home (I Was Born)." This EP is the follow up to the debut record, Sun Will Rise, which gained widespread critical acclaim from media outlets including American Songwriter, Relix, PopWrapped and more.

In anticipation of Far From Home, the band spent the better part of 2017 on the road, including an appearance at Firefly Festival. The first single "Caroline" has gained traction at radio and online, recently cracking the top 100 at AAA and racking up more than half a million streams on Spotify. 2018 will see the release of a full-length album and another national tour. As Culture Collide puts it, "With songs like this, Animal Years are a band to watch."

About Animal Years
Brooklyn’s Animal Years are poised to take the indie rock world by storm. Fresh off a national spring/summer 2106 tour that included a sold-out stop at New York City's famed Gramercy Theatre, the band holed up in a cabin in Woodstock with Ryan Hadlock, the hit producer behind the smash debut records for The Lumineers and Vance Joy, to cut their highly anticipated follow-up to 2014’s “Sun Will Rise.” With influences ranging from early Kings of Leon and My Morning Jacket to Young The Giant and The Avett Brothers, Animal Years is driven by Mike McFadden’s passion-filled songwriting and crisp vocals. Their boozy, raucous, high-energy live show provides the icing on the cake for this fast-rising quartet.