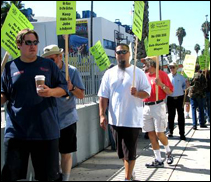 LOS ANGELES (CelebrityAccess MediaWire) — More than 60 members of IATSE Local 33 Stagehands and several other locals joined forces under the blazing morning sun in front of the Hollywood Palladium on Wednesday, Aug. 6 to protest the possibility of the Community Redevelopment Agency (CRA/LA) giving a multi-million dollar grant towards renovations of the historic theater without including provisions to protect good middle class jobs at the site.

“We are here because the Palladium owners asked for $2.5 million dollars from the city,” said Peter Marley, Local 33 Business Representative and a union member for 29 years. “If taxpayers are going to fund this, good middle class jobs should be part of the agreement.”

The union opposes the CRA/LA’s plan to ask for a special waiver of its own policy prohibiting grants to for-profit companies in order to pass a resolution giving the night club’s developers financial aid for renovations unless the funds come with provisions to protect middle-class union jobs. Traditionally, the purpose of the CRA/LA is to fund projects that benefit the lives of working Angelinos. For the most part, these are non-profit programs designed to build better and stronger communities.

“We have to let our City leaders know that we won’t stand by and let the CRA use public funding to help cut good middle class jobs,” said IA 33 Rep Jimmy Wright, who helped organize the protest.

The Hollywood Palladium, which is scheduled to reopen this November, is owned by Newport Capital Advisors and is leased to Live Nation, Inc. Headquarted in Los Angeles, Live Nation is the country’s largest promoter of live music events and festivals and is attempting to dominate the Los Angeles market by using discounted labor — a practice it employs across America. In 2007, the company reported revenue of $4.2 billion and recently signed multimillion-dollar deals with artists including Jay-Z, Madonna and U2.

Newport Capital Advisors purchased the Palladium site for a reported $68 million in 2007 and has plans for further commercial developments on the Hollywood parcel.
News of the picket action immediately caught the attention of Live Nation executives, who agreed to meet with union representatives in late August to discuss the issue. The union hopes the informal talks will lead towards the use of union labor and ultimately a labor peace agreement.

Local 33 was joined on the picket line by members of Locals 705 (Costumers), 706 (Hair & Make-up), 857 (Ticket Sellers), 768 (Wardrobe), 871 (Script Supervisors) among others. The coalition of locals has promised to work together to continue to protest the use of non-union labor at the venue for as long as necessary to achieve its goal.

“The protest shows our unity, strength and what we believe in,” said Danny Blanch, IATSE Local 33 delegate and member for 46 years. “This lets them know we’ve only begun, we’re not giving up on this.” –by CelebrityAccess Staff Writers