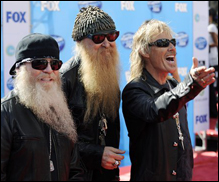 LOS ANGELES (CelebrityAccess MediaWire) — ZZ Top band members, Billy F Gibbons, Frank Beard and Dusty Hill, after touring and recording for the past 39 years and have decided to embark on a tour that will bring them even closer, literally, to their legions of fans. Kicking off in Wichita, KS on September 26, the ZZ Top In Your Face Tour will bring the Rock and Roll Hall of Famers to the kind of intimate venues they played much earlier in their tenure as rock's the longest running band with original personnel intact. For six weeks this fall, the trio forswears stadiums, areas and festivals for small theaters where they expect to connect very directly with their audience.

Guitarist Billy F Gibbons explains, "Earlier this year, because of a routing quirk, we accepted a 'fill-in' date at a little old theater in Knoxville. That experience reminded us of our roots, both in terms of a stripped-down, gut-bucket musical approach and the direct connection with the people who came to see us. So we said, 'why not do this on a more extended basis and have some real fun?'"

Though they've just come back from Europe where they played to monumental
crowds at festivals in eight countries, the band was game to revisit the
experience and, as bassist Dusty Hill puts it, "We figured it would be a
kick to, so to speak, get in people's faces and the idea for this tour was born."

Drummer Frank Beard added, "To actually be able to see whole audience and
interact with them like this is a throwback to our early days and who
wouldn't want to go back in time?"

Earlier this year, at the Nokia Theatre in Dallas, the band was shot for the Eagle Vision DVD release Live From Texas that went on to debut at #1 on Billboard's music DVD chart the week it was released. The title has since returned to the top slot on that chart where it has stayed for two
consecutive weeks. They are currently touring the U.S. with Brooks & Dunn packing arenas and sheds around the country. On September 9th, the
anniversary of their breakthrough album, Eliminator, will be celebrated with the release of a special Collectors Edition of the RIAA-certified Diamond album (over 10 million units) by Warner Bros. through Rhino Entertainment.