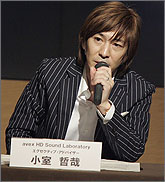 TOKYO (CelebrityAccess MediaWire) — Japanese producer Tetsuya Komuro, the king of J-pop in the 1990s has been arrested on charges that he defrauded an investor for more than $5 million.

According to Billboard, Komuro allegedly sold the investor the rights to more than 800 of Komuro's songs for $10 million, however after receiving half as an advance, Komuro reportedly didn't come through with the rights.

To compound matters, Komuro didn't hold the rights to many of the songs he attempted to sell, instead they belonged to AVEX, the label he released much of his material through in the '90s.

Komuro's star has faded somewhat and has been producing for Sony with artists such as Ami Suzuki but his most recent act, Globe is back on AVEX which has stated that they will suspend releases by the band that had been slated for later this year, Billboard reported. – CelebrityAccess Staff Writers