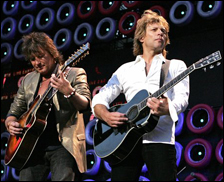 LOS ANGELES (CelebrityAccess MediaWire) — ASCAP is pleased to announce that on April 10th Jon Bon Jovi and Richie Sambora will be special featured guests at the 3rd Annual ASCAP â€œI Create Musicâ€ EXPO. Marking the 25th anniversary of the founding of Bon Jovi, and their 25th anniversary as members of ASCAP, Jon and Richie will participate in a rare Q&A session focusing on their enduring collaboration as songwriters. The EXPO will take place April 10-12 at the Renaissance Hollywood Hotel in Los Angeles.

New Jerseyâ€™s Bon Jovi has sold over 120 million albums worldwide and has performed more than 2,500 concerts in over 50 countries. Since hitting it big with 1986â€™s Slippery When Wet and 1988â€™s New Jersey albums, which charted 11 Top 10 hits, including five #1 hits, the band launched themselves into superstardom. They have created some of the most crowd-pleasing songs of the past 25 years, including â€œRunaway,â€ â€œYou Give Love a Bad Name,â€ â€œLivinâ€™ on a Prayer,â€ â€œBad Medicine,â€ â€œWanted Dead or Alive,â€ â€œIâ€™ll Be There For You,â€ â€œItâ€™s My Lifeâ€ and many more. In 2006, Bon Jovi became the first rock band to have a #1 hit on Billboardâ€™s Hot Country Chart with their song, â€œWho Says You Canâ€™t Go Home,â€ a duet with Sugarlandâ€™s Jennifer Nettles. The song also won a Grammy for Best Country Collaboration with Vocals, demonstrating Bon Joviâ€™s massive appeal across the musical spectrum. Last year, their tenth studio album, Lost Highway, for which Bon Jovi and Sambora collaborated on ten of the songs, debuted at #1 on the Billboard charts and also reached #1 in Japan, Canada, Australia and Europe, a phenomenal achievement for a band whose members have maintained a strong and enduring commitment to their relationship, their fans and, most importantly, to their art.

The ASCAP "I Create Music" EXPO has become a destination event for music creators – songwriters, composers, producers, musicians and performers alike – and the industry players that support them. It is the only conference dedicated to songwriting and composing and, in just two years, has attracted over 4,000 attendees. This three-day event covers all genres of music and features an array of panels, workshops, keynotes, master classes, song critiquing, networking events, product displays, state-of-the-art technology demonstrations, performances, and much more.

The 3rd Annual ASCAP â€œI Create Musicâ€ EXPO is part of â€œASCAP I Create Music Week" â€“ an entire week of events being held in Los Angeles to celebrate the voice of the music creator. – CelebrityAccess Staff Writers