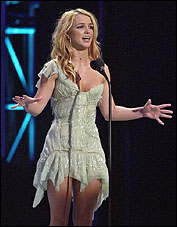 PHILADELPHIA (AP) — A federal judge dismissed a copyright infringement lawsuit against Britney Spears, saying two Philadelphia songwriters failed to prove the pop singer copied the melody of one of their songs.

U.S. District Judge Berle M. Schiller ruled last week that Michael Cottrill and Lawrence Wnukowski couldn't provide enough evidence to prove Spears had access to their song titled, "What You See Is What You Get," when she recorded, "What U See (Is What U Get)."

Cottrill and Wnukowski said they gave one of Spears' representatives a copyrighted version of their tune in late 1999 after being asked to submit songs for consideration for the singer's upcoming album.

But Schiller, citing defense testimony, said the melody of Spears' song was completed by the beginning of November 1999, before Spears and her representatives "would have had access to a copyrighted version of plaintiffs' song." He also said there weren't enough similarities between the two songs to prove copyright infringement.

The four men credited with writing Spears' song, released on her best-selling second album, "Oops! … I Did it Again," testified that they hadn't heard Cottrill and Wnukowski's tune until two months ago.

"As plaintiffs have not come forward with any affirmative evidence showing access, there is no reasonable possibility that the creators copied plaintiffs' song before November 1999 when the melody of defendants' song was completed," Schiller wrote in his decision.