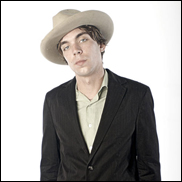 Members of the audience reported on online that Earle appeared to be drinking while on-stage and cut his performance short after a shirt was tossed from the crowd and landed on his guitar.

Earle later tweeted: "Sorry for missing the radio Louisville. I was in jail! We will be making the show at headliners though. Free again!!"

However, he later took a more conciliatory tone when later releasing a statement through his label, Bloodshot Records: "Unfortunately, reports surfacing online about the incident in Indianapolis are not accurate. I have been advised by counsel that I should not comment on a pending criminal matter, but suffice to say that I am looking forward to having my day in court. I would also like to say that I oppose violence against women in any form." – CelebrityAccess Staff Writers