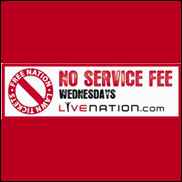 LOS ANGELES (Hypebot) –
Live Nation is expanding its “No Service Fee” promotion to all tickets at its amphitheaters for 24 hours this Wednesday, June 10th on LiveNation.com.

Last week’s “No Service Fee Wednesday” generated a sales spike 500% higher than the average number of tickets sold on a typical Wednesday according to the company. The company came under some fire last week when fans realized that service fee has been dropped, parking and certain venue fees and taxes still apply.

Selling tickets during a tough economy is behind the series of Wednesday promotions, but the promoter is also sending a message to merger partner Ticketmaster and the greater music industry that ticket fees have gotten out of control.

The Wednesday promotions "send a strong message to the music industry about how strongly consumers feel about ticket fees." a spokesperson told Hypebot. "Our job is to get as many fans as possible to the show to see their favorite artists," said Live Nation CEO Michael Rapino.

Tickets for this week’s installment of “No Service Fee Wednesday” go on sale at 12:01 a.m. local time on June 10th at LiveNation.com. More Wednesday promotions will follow.

Tickets without service fees are available at all Live Nation amphitheaters in the US for concerts including: