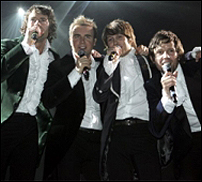 LONDON (VIP-NEWS) — Take That are to embark on the biggest tour the UK and Ireland have ever seen, playing to more than a million people at 20 stadium concerts.


That is more fans than watched Michael Jackson in 1988 or saw the biggest runs by acts like U2 and The Rolling Stones.


Fans have spent £50m on tickets for the former boyband's Circus Live tour, which starts in Sunderland later.


It comes amid a summer of massive gigs, with Oasis, Jackson, Britney Spears, Coldplay and Madonna all on the road.


"I think it's a bit of escape for everybody," Take That star Gary Barlow told the BBC's Lizo Mzimba.


"It's one night in the year that they can go out, enjoy themselves, sing songs that maybe mean something to them in their lives, something they've carried with them for years."


Take That will play to 94,000 fans at Sunderland's Stadium of Light over two nights on Friday and Saturday, before moving on to Coventry, Dublin, Cardiff and Glasgow.


They then play five nights at Manchester's Old Trafford Cricket Ground and four shows at Wembley Stadium in London, finishing this time next month.


"It's unique," said their promoter, Simon Moran of SJM Concerts.


"It's testament to their huge popularity and the quality of the previous tours. The word of mouth has been tremendous on the last three runs of dates they've done since they got back together."


He said the total attendance of 1,080,000 would be higher than for Jackson's Bad tour.


In 1988, the pop star's first world tour as a solo artist included a record seven sold-out gigs at Wembley Stadium.


Earlier this year, PRS for Music, which collects royalties for songwriters, said the amount of money spent on live music had overtaken the amount spent on CDs and other recorded music for the first time.


"When people are down… say with this economic issue at the moment, people tend look towards entertainment, don't they," said Take That's Jason Orange.


"They want to pull themselves out of the mire, go and watch a football match or a concert, sort of keep the depression at bay, maybe."


PRS chief economist Will Page agreed fans were continuing to spend on big tickets despite cutting back on other luxuries during the recession.


"It is tempting to think that consumers might be cutting back on various types of leisure spend to ensure that they can commit to their favorite summer festival or tour," he said.


"Michael Jackson and Take That have done great. If you can do these types of tours and sell these types of tickets with basically word of mouth carrying it, it's phenomenal.


"Without much of a push by the industry itself, they seem to have done phenomenally well during an economic crisis. These tours are record-breaking tours." — According to BBC