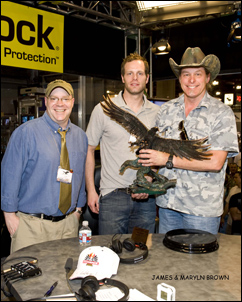 PHEONIX, AZ (CelebrityAccess MediaWire) — Multi-platinum guitar icon, author, outspoken activist, outdoorsman and
TV personality Ted Nugent was recently honored with the "2009 General
Edward J. Bronars Defender Of Freedom Award," presented by Taurus
International during the 138th NRA Annual Meetings and Exhibits in
Phoenix, Arizona May 16. Ted–recognized as America's Number One
proponent of the Second Amendment–has served continuously on the Board
of Directors of the NRA since his initial election to the Board in 1995.

Who Serves So Unselfishly as a Board Member of the

And Without Regard to his Career

And Without Fear of Criticism

Appears on the National Stage to Discuss

His Pride in Being A True American

And an Absolute Defender of Our Freedoms

Our Forefathers Would Have Been Proud To Count

Him Among Them Just As We Are Proud

Granted By The U.S. Constitution and The Bill Of Rights."

Bob Morrison, President & CEO of Taurus International Mfg., Inc.,
explains their decision to bestow TED with this award: "The wording on
the award was really indicative of our feelings about Ted..he is a true
and original American Patriot who places his beliefs in our freedoms
above his personal goals. We really cannot thank him enough for his
unwavering perseverance in the quest to keep our liberties the most
important part of our lives and subsequent leadership in the world.
Thanks to him (and few others like him), we enjoy our abilities to lead
our lives as we desire and our unbelievable freedoms as an example to
the universe!"

Cam Edwards–host of NRA Radio's "Cam and Company" and Sirius Radio's
"Patriot 144" who was present when TED received the award–comments:
"It's so appropriate for Ted Nugent to have been honored with the
Defender of Freedom Award, because that's exactly what he is. There
aren't many Americans who are as devoted to the cause of freedom as Ted
Nugent, and his unwavering dedication and passion for the 2nd Amendment
and the men and women of our armed forces should serve as an inspiration
to everyone who has a love of liberty and country in their own hearts."
While TED was in Phoenix, famed Maricopa County Sheriff Joe Arpaio
fondly referred to him as "the Ultimate American."

In other news, Ted will release a new live DVD and Blu-ray–Motor City
Mayhem–June 30 via Eagle Rock Entertainment. Shot July 4, 2008 in
front of a house packed with a wildly enthusiastic crowd of thousands at
the outdoor DTE Energy Music Theatre in the Motor City Madman's hometown
of Detroit, the disc documents the celebration of NUGENT's 6000th live
performance, including guest appearances and a set list of nearly two
dozen NUGENT favorites honoring his blues and soul roots. And this
August, viewers from around the world will have the opportunity to
experience TED's wilderness skills on his new television series on CMT,
"Runnin' Wild.From Ted Nugent." –by CelebrityAccess Staff Writers