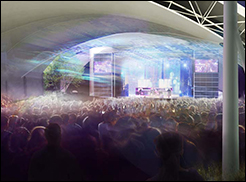 The 5,000-seat tented amphitheater is located near the beach and Coney Island's historic boardwalk and amusement parks. Constructed from a former restaurant, the venue opened over the July 4th weekend with shows by Ziggy Marley, Sting, The Beach Boys and The Hollywood Vampires.

Planned improvements for the venue include a rooftop cafe and a restaurant with an 80-foot-long bar. The venue's existing stage can be reconfigured to face the restaurant to allow the venue to host events in the off-season.

The amphitheater already has a busy summer schedule booked, with upcoming shows including Slightly Stoopid, The Art of Rap festival, Erykah Badu, NKOTB, Andrew Dice Clay, Deftones and numerous others.

"Once the summer was booked, I actually asked our marketing people to tell me how many musical genres are represented here, and they came up with a dozen over about 40 shows — that’s incredible,” Live Nation North Atlantic president Alan Ostfield told Billboard. “Mayor DeBlasio commented at our press conference, ‘That may be incredible, but that’s Brooklyn.’” The venue will also have a free concert series and plans to host sporting events, comedy, and “we’ve even gotten calls about a high school graduations,” Ostfield added. – Staff Writers