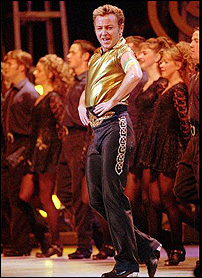 (CelebrityAccess MediaWire)– Michael Flatley's Lord of the Dance tour, the international Irish dancing phenomenon that has performed sold-out shows at theaters, arenas and stadiums in more than 45 countries, is returning to theaters across the United States for its ninth consecutive year. The tour is scheduled to dance its way into more than 40 cities this fall, kicking off on September 28 in Morgantown, WV.

Michael Flatley, who originated the role of the Lord, serves as the artistic director and continues to oversee all aspects of the production. The first American to win the All-World Championship in Irish Dance, Flatley opened the show in Dublin in 1996. The Guinness Book of World Records lists Flatley for having "the world's fastest feet" at 35 taps per second.

"Lord of the Dance is so close to my heart. I am gratified by the wild applause and excitement of the audience night after night, country after country," says Flatley "The show is continuously updated, so that it's constantly fresh and exciting for the audience and the dancers, without changing the foundation that has made Lord of the Dance the success that it is today."

Lord of the Dance is a mesmerizing blend of traditional and modern Celtic music and dance. The story is a classic tale of good vs. evil based on old Irish folklore as Don Dorcha, the Dark Lord, challenges the Lord of the Dance. It is also a passionate love story that is expressed through dance numbers that transport audiences into a mystical and exhilarating world of intense passion. The action is played out over 21 scenes, on a grand scale of precision dancing, dramatic music, colorful costumes and state-of-the-art staging and lighting. Flatley explains, "Lord of the Dance is not ballet. It's not tap. It's not Flamenco. It's something that I created from scratch because nothing else was just right."

The Lord of the Dance troupe features Irish dance champions from around the world. These gifted performers, who have an average age of 22 years, stretch every boundary of a traditional form of dance that has evolved for more than 2,000 years. "Michael Flatley's Lord of the Dance is one of the top-grossing theatrical tours in history," said Lee Marshall, president of Magic Arts & Entertainment, the tour promoter. "Thousands of eager fans continue to line up at every performance thanks to these young, talented and energetic dancers."

Magic Arts & Entertainment, headed by Marshall and Joe Marsh, is also currently producing "The Magic of David Copperfield" and "Grease" starring Frankie Avalon. They are former owners of Magicworks Entertainment.

Lord of the Dance tentative itinerary: