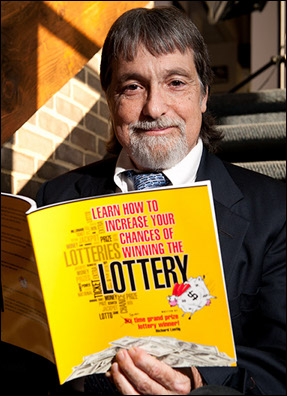 ORLANDO, FL (CelebrityAccess MediaWire) — Winning the lottery is nearly impossible – or is it?

Richard Lustig has taken his career from touring as a singer and drummer, to booking acts as an agent, to taking speaking engagements on his lottery-winning techniques.

In the 60’s & 70’s, Lustig toured the country as a singer and drummer and in the 80's Lustig, started his talent agency, Lustig Talent Enterprises, Inc., booking national acts around the world.

At the same time, the lottery began in Florida, where Lustig lived; and when, like everyone else, Lustig was losing more than winning, he began working on techniques to better his odds. Through trial and error, Lustig had accumulated a lottery method that was resulting in small cash prize wins.

Soon enough, Lustig won his first lottery game grand prize, and simply considered himself a "lucky guy."  But then he won his second, third and fourth grand prize. By the fourth win, while others were still skeptical of his winning methods, Lustig knew he had a reliable process.

By Lustig's fifth win, others started to also believe he had a winning method and wanted to learn "his secret"; so he printed it out in a seven-page manuscript and sold it.

After Lustig won his sixth lottery, he wrote a book, "Learn How To Increase Your Chances Of Winning The Lottery", which has sold copies worldwide, including in Spanish and an audiobook format.

As a result of winning his seventh lottery, Lustig has appeared on The Learning Channel, Good Morning America, Fox And Friends, Canadian T.V., German T.V., and The Today Show In Australia among others.

Most recently, Lustig has been recognized by Ripley’s “Believe It Or Not."

Lustig currently tours as a speaker to share how he went from playing the lottery and losing, to having won several hundred thousand dollars in smaller prizes, to seven lottery game grand prizes.

When CelebrityAccess asked for some tips for people who are looking to get deeper into Lustig's method, he revealed a couple for popular scratch games.

From that set of 10 tickets, you will have at least one winner, possibly two, and maybe even 3.

After seeing it done thousands of times, including on the Rachel Ray show, Lustig stands by these tips.

Richard Lustig's plans for the future are bright, "I know I will win number eight."