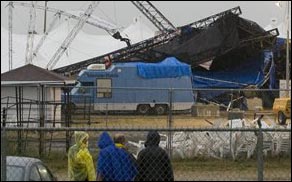 WETASKIWIN, Alta. (CelebrityAccess MediaWire) — The family of a Saskatchewan woman killed in a stage collapse at the 2009 Big Valley Jamboree has filed a lawsuit against the City of Camrose, Alta., the concert promoter and several other related companies, seeking more than $5 million.

According to the Edmonton Journal, 35-year-old Donna Moore had seats in the VIP section of the main stage on August 1st when the festival was struck by a windstorm, causing the stage to collapse. In the collapse, Moore was crushed by a falling speaker, resulting in her death. In addition to Moore's death, the collapse left 75 injured.

The lawsuit filed by her sons (ages 10 and 16 at the time of Moore's death) alleging that the city, promoter, the security company at the event and the stage designer were negligent or failed to provide adequate care. The suit also alleges that the city and the promoter, Panhandle Productions Ltd, failed to have adequate weather plans in place.

Other companies named in the suit include Premier Global Production Company Ltd., which owned and assembled the stage; Stageline Mobile Stage Inc., which manufactured the stage; Backstage Support Services Ltd., which provided security for the event; and Clair Brothers, L.P., responsible for the audio system at the festival.