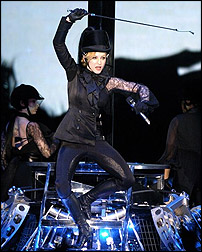 The pop superstar's management informed Warner last week that she would accept Live Nation's offer after the record company refused to match the deal, said the person, who spoke on condition of anonymity because of the confidential nature of the matter.

Under terms of the proposed deal, Madonna, 49, would receive a signing bonus of about $18 million and a roughly $17 million advance for each of three albums, the person said. A portion of the compensation would involve stock, the person said.

Madonna could also benefit significantly from the touring component of the deal, which gives Live Nation the exclusive right to promote her tours, the person said.

In a bid to compete with the Live Nation offer, Warner pursued a possible partnership with ticket retailer Ticketmaster, a unit of IAC/InterActiveCorp, that would have enabled the record company to offer a spectrum of touring services to Madonna, the person said.

Warner Music and Live Nation declined to comment. A call to Madonna's publicist was not immediately returned.

The proposed 10-year agreement would give Live Nation the rights to sell Madonna merchandise and license her name, and any revenue from such products would be split between the singer and the company, The Wall Street Journal reported, citing unnamed people familiar with the deal.

Live Nation also would have to pay $50 million in cash and stock to promote Madonna's tours, according to the Journal, which broke news of the deal on its Web site Wednesday afternoon.

The agreement would be in line with similar deals other artists have struck with labels in recent years that give record companies a stake in their artists beyond the sale of recordings.

Live Nation, which promotes and produces music shows, theatrical performances and other live events worldwide, has been looking to expand beyond its core businesses to offer artists services such as direct merchandising and exclusive ticket sales. Its Artist Nation division sells tickets and artist merchandise online.

Warner has also set out to strike deals with artists and other music industry players in a bid to garner a share of revenue from other segments of the music industry, such as merchandising and touring. Those segments are faring better than recorded music sales.

Madonna first signed with Warner Music Group subsidiary Warner Bros. Records in 1984. Her last contract with the New York-based company calls for her to deliver one more studio album, expected next year, and a greatest hits record.

The singer has been among Warner Music's best-selling artists for years and arguably remains pop music royalty. Losing the rights to release her new recordings could prove to be a significant blow to the company's bottom line.

Warner, however, retains the rights to sell and license her catalog of hits such as "Like a Virgin" and "Music."

Lefsetz Adds His Input On The Madonna/Live Nation Deal

This has got more to do with AEG than it does Warner Music. Rapino had to make sure he had the star under his belt, to prevent his rival from scooping her up, because there are very few arena acts left.

That's the story. Who's going to fill these buildings in the future?

Major labels aren't breaking career acts. And radio and MTV could give a fuck. As for the niches, how does one grow them, in a cacophonous world where Radiohead's music isn't even going to get played on the radio, and will be forgotten by everybody but fans momentarily.

Not that there isn't a Warner story here. How the major labels have been so busy protecting their rights that they've made music free. They don't know how to market in this new world, and their economics are positively twentieth century. How many albums can this old broad sell ANYWAY?

Madonna blinked. She went back to the dance floor. The first time ever that she did not move the ball forward, did not give us something we didn't expect. When the Material Girl starts worrying about her base, her impact on popular culture, you know the times are truly changing.

But people want to see Madonna live. The same way they still want to see "Mouse Trap" on the West End. But she's better than a fixed play, she's going to provide an EXTRAVAGANZA! She'll make you laugh, she'll shock you, you'll get your money's worth in water cooler stories. You'll be able to relive your youth, and your children will get insight into what the Big 80s were truly about.

But an impact on popular culture? Come on. Unless it's got to do with adoption or world peace or something. Madonna's got no cultural impact musically anymore. But her expertise was never music, but BUSINESS! And she's pulled off a good one here. Getting guaranteed income. As for new music…

If Madonna CHOOSES to make new music, she can afford to give it away with concert tickets. And that's a better plan than selling it via Starbucks. Whoo-hoo, you get a lot of publicity, but no one hears the tunes. Paul McCartney hasn't even gone platinum. So he made a few bucks… Believe me, future Starbucks deals won't be so rich in the future. They overpaid Paul to make an impact. And Joni's record ain't burning up the chart.

Bottom line, the majors have lost their clout. Their monopoly was always distribution, and they used this to get talent to sign. Eventually they owned EXHIBITION also. So, if you wanted to play, you had to sign with them. The fact that they weren't hip enough to know this wasn't going to last forever is astounding, especially since trends come and go so quickly in the music business.

Not that quickly in the past though. Bands used to have first class runs in the neighborhood of a decade. And although their new music may or may not be relevant, this catalog of hits drives people to the gig.

And Madonna had plenty of hits. Hell, if you don't own "The Immaculate Collection", you're not a music fan. You want to see her live.

But, young 'uns who are going to follow her into the buildings? That's Live Nation's challenge, to create new hit acts, not skim the cream of the old world. So far, they've shown no evidence of breakthroughs in this area. AEG doesn't even want to play in this area. Who is going to build acts in the future? Not the promoter, not the major label…