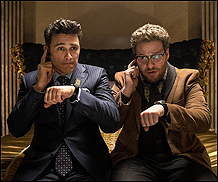 According to the Hollywood Reporter, Regal Entertainment, AMC Entertainment, Cinemark, Carmike Cinemas and Cineplex Entertainment have all decided to postpone or cancel planned showings of the film, which is set for release on Dec. 25th.

"Due to the wavering support of the film The Interview by Sony Pictures, as well as the ambiguous nature of any real or perceived security threats, Regal Entertainment Group has decided to delay the opening of the film in our theatres," Regal said in a statement to THR Wednesday.

In response, Sony announced that they would be postponing the release of the film.

"In light of the decision by the majority of our exhibitors not to show the film The Interview, we have decided not to move forward with the planned December 25 theatrical release. We respect and understand our partners’ decision and, of course, completely share their paramount interest in the safety of employees and theater-goers," A Sony spokesman said in a press release.

Guardians of Peace, the group who claimed responsibility for the attacks on Sony, allegedly issued a threat of violence against theaters showing the film.

"We recommend you to keep yourself distant from the places at that time," the hackers wrote in a reference to theaters that will show the film. "(If your house is nearby, you'd better leave)," a message purportedly from the group said.

The film, staring Seth Rogan and James Franco, is a comedy that depicts media personalities being recruited by the CIA to assassinate North Korean leader Kim Jong Un. In a departure for Hollywood, the film uses no pointed allusions and instead, directly portrays the North Korean leader as a character in the film.

While the attackers have not been directly linked to, or claim to be associated with North Korea, the sophistication of the malware used in the attack on Sony Pictures strongly suggests a state actor. Similar software was used to attack South Korean financial institutions earlier this year. – Staff Writers