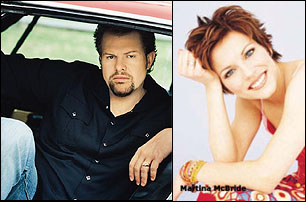 (CelebrityAccess MediaWire) — Martina McBride, Toby Keith, Reba McEntire, Montgomery Gentry and Lonestar are the first round of artists set to perform at the 39th Annual Academy of Country Music Awards, which will be broadcast Live from the Mandalay Bay Resort & Casino in Las Vegas on May 26 at 8:00 PM ET/PT on the CBS-TV Network. Additional performers will be named shortly.

Keith won Entertainer of the Year honors last year and is nominated for that same award again this year. In 2000 he also won Album of the Year and Top Male Vocalist of the Year. McBride won Top Female Vocalist honors in both 2001 and 2002. She is also being honored for her work with domestic violence organizations as a nominee for the Home Depot Humanitarian Award.

McEntire is the Academy of Country Music's "Leading Lady," a title she received in 2003 in recognition of her status as the Academy's all-time leading winner in the Top Female Vocalist category. She's also serving as host for this year's telecast, which will mark her unprecedented seventh time in the job and her third in as many years.

Montgomery Gentry won Top New Vocal Duet or Group in 1999, and are nominated this year for Top Vocal Duo as well as for their work on Tracy Byrd's "The Truth About Men." Lonestar, last year's winners of The Home Depot Humanitarian Award, won Top Vocal Group honors in 2001 and have five t wins to their name.

The Academy of Country Music was founded in 1964 with a mission to support, promote, and enhance the advancement of the country music industry worldwide. The Academy, which is comprised of 3,000+ professional members and a newly established Associate Membership, is headquartered in Burbank, CA.