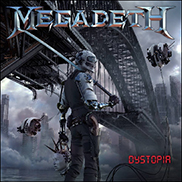 The tour kicks off in Casper, WY on September 20, 2016 and will take them across the U.S., hitting 16 states with special guests to include Amon Amarth, Suicidal Tendencies, Metal Church and Havok.

The band is touring in support of their latest studio album Dystopia, which was released in January.

The album's chart impact was the strongest for the band since 1992's Countdown To Extinction, debuting at No. 3 on the Billboard Top 200 chart (behind Adele and Beiber), No. 1 album on Billboard's Hard Music and Top Rock charts, and at No. 2 on Billboard's Top Album Sales chart.

Globally, Dystopia also achieved top 10 debuts in Canada (No. 2), Japan (No. 2 international chart), Finland (No. 3), Mexico (No. 4), Czech Republic (No. 5), Australia (No. 6), New Zealand (No. 6), Switzerland (No. 7), Poland (No. 8) and Germany (No. 10), which along with Belgium, Ireland and Spain contributed to achieve the band's highest ever chart positions in their thirty year history in a total of 10 countries around the world.

"Post American World" the latest single released from the album is being promoted with a video release, which can be seen ,a href= http://usa-tomorrow.us target=new>here. – Staff Writers