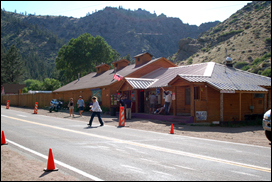 FT. COLLINS, CO (CelebrityAccess MediaWire) — The Mishawaka Amphitheatre could be facing closure as the venue's current owner is facing criminal charges in connection to an alleged drug distrbution operation.

According to the Rocky Mountain Collegian, police allege that the venue's owner Robin Jones, was growing and selling marijuana at the venue and was alleged to be in possession of the club drug ecstasy at the time of his arrest.

The Larimer County Sheriff’s Office claim that they found several hundred marijuana plants at Jones' residence and at Mishawaka and conducted a six month investigation of Jones before his arrest.

Although Jones is facing criminal charges in the county's court system, the federal government has filed a civil suit, seeking to seize assets from Jones to the tune of $22,000 the Collegian reported. These assets however, do not include the Mishawaka Amphitheatre.

"All parties agreed the mphitheatre would not be a part of the agreement," Jeff Dorschner, spokesman for the U.S. Attorney’s Office told the Collegian.

Although the exclusion from forfeiture proceedings is good news for the Mishawaka, it doesn't mean that the shed is out of hot water yet. Unless a new owner can be found, the venue will be forced to close at the end of its season on September 19th.

This year, the Mishawaka has hosted shows from artists such as Lotus, Sam Bush, Eskmo and Beats Antique. Still on the books before the end of the season are EOTO w/ The Acidophiles on Sept. 17, Conspirator feat. Marc Brownstein & Aaron Magner of The Disco Biscuitson on September 18th and JJ Grey & MOFRO on September 19th. – CelebrityAccess Staff Writers