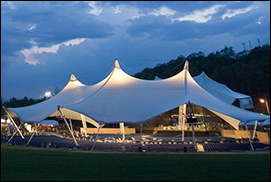 SCRANTON, PA (CelebrityAccess — Lackawanna County Commissioners are weighing a new deal with Live Nation for the amphitheater on Montage Mountain that would give the promoter more options for an early exit from their lease, but would also impose new, per-ticket fees for shows at the venue.

According to the Scranton Times-Tribune, tickets for shows under the new agreement would see fees of $1.50 that would grow to $2.50 in 2021. It would be up to Live Nation if they absorbed the additional cost, or passed it on to concert-goers.

The deal under consideration would also give Live Nation the annual option to withdraw from their lease to operate the county-owned shed.

“The county commissioners recognize the fact that these concerts are a very attractive venue for Lackawanna County and a good economic engine,” Andy Wallace, chief of staff to the board of commissioners told the Times-Tribune. “Our team wanted to be able to maintain the concerts at the amphitheater and be able to do so in a way where it was not going to cost the taxpayers of Lackawanna County money to subsidize them.”

Live Nation's future at the amphitheater on Montage Mountain has been under negotiation since 2016. The county and the promoter reached a short-term deal last year for the 2016 concert season and the county has approved most of the promoter's planned shows the venue's 2017 series, including Peach Music Festival and Camp Bisco, the Times-Tribune said.

The deal, if approved, would run for the next four years.