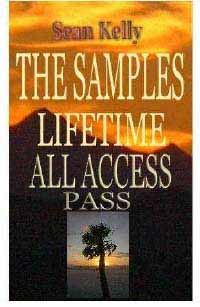 Dallas, TX (March 28, 2003) – What does a band do when they have been together for over 15 years, sold over a million records, and played to thousands of loyal fans in sold-out venues nationwide only to find they have little money to continue touring? The Samples, a much-loved Colorado-based band, looked no further than the people who have supported them for those 15 years–their fans.

Sean Kelly, The Samples front man had a unique idea. "We sent out an e-mail detailing our situation and asking fans to contribute money, ideas, support of any kind. Anything to help get the band back on track so we could hit the road again. The response has been overwhelming."

In January, with blind faith, the band launched their Lifetime Pass –a laminate for sale from their web site: www.thesamples.com The Pass was an invitation to loyal fans to place a value on what Sean Kelly and The Samples’ music meant to them. To The Samples amazement, 500+ laminates have been purchased and support of all kinds continues to pour in daily. Even more encouraging, dozens of fan-volunteers (accountants, lawyers, and marketing teams) have rallied to assist The Samples who had to rebuild every aspect of their organization, streamlining their operations and creating new profit centers. The band is finally into the black. The bond the music created with the fans over the years made the difference.

Focused on the future, a new live acoustic DVD scheduled for April release captures an evening of The Samples’ music filmed in front of an audience of the first Lifetime Pass holders. Invitations to the filming were the band’s “thank-you” to loyal fans who contributed time and money over recent months. Additionally, performances from two classic Colorado venues, the Red Rocks Amphitheater (capacity 6500) and the Fox Theater, were captured live for a CD due for a May release.

Jessica, a fan from Los Angeles summed it up. "When I was in college I saw The Samples live for the first time. The depth of the lyrics, the incredibly diverse melodies and the realness of their music moved me to tears. The words are important, they are different, and I can feel each musician's heart being poured out when I watch them on stage. I have since seen the band live numerous times and it boggles my mind how they keep up the energy, creativity, and true love for their fans at each and every show. I have yet to come across a band that consistently produces music so astounding and so human."

The Samples’ spring tour (20 cities so far) is set to kick off on April 17 in New Hampshire and a national tour is scheduled for summer. Expect to see The Samples on national TV and watch them garner an invitation back to the Tonight Show with Jay Leno.