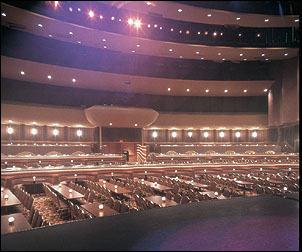 ONEIDA NATION HOMELANDS – The Oneida Indian Nation’s Turning Stone Casino Resort has been nominated for the Academy of Country Music’s "Casino of the Year" award. Winners will be announced at the awards show on May 21.

The 800-seat Showroom at Turning Stone, recently recognized by a well known industry magazine, as one of the top small concert venues in the country, has played host to the full range of country artists in its four-year history, from established artists like George Jones, Randy Travis, Willie Nelson and Merle Haggard to rising stars like Billy Gilman, Chely Wright and Rascal Flatts.

Nominations for the "Casino of the Year" award are made by a committee of talent buyers – the people who arrange for acts to appear in various venues. Turning Stone is one of 19 nominees for this year’s award and one of only three in the Northeast.

Sam Madonia, entertainment director at Turning Stone, told CelebrityAccess "This nomination is a compliment to the resort as a whole." "It’s the whole package that keeps these artists coming back. They like the Showroom, but they also like the hotel, the restaurants, the gaming and the golf – the golf especially."

Upcoming country acts at the Showroom include Gary Allan on March 7, Lorrie Morgan on March 14, Chris Cagle on April 4, Trick Pony on April 11, and Aaron Tippin on May 2.

Jay Williams, an agent with the William Morris Agency, which books many of the country acts at the Showroom, agreed that the resort itself is an attraction for artists.

"Of the casinos on the East Coast, Turning Stone has the nicest room to play, and certainly the nicest room of that size on the Coast," Williams said. "Our clients enjoy playing there and they want to go back because they like the room and because they’re taken care of when they get there."

Steve Tolin, publisher of the Academy of Country Music awards program, said the nomination is a testament to Turning Stone’s fast-rising reputation in the entertainment industry.

"The committee nominated Turning Stone because they know how important Turning Stone is as a place to promote and market country music," Tolin said. "This is a very select list of venues, and each one was nominated because it has an impact in the world of country music."

More information about the awards show and nominees can be found on the Internet at www.acmprogram.com

Zankel Hall, under the main auditorium, has a movable floor and stage, and can seat 540 to 644, depending on whether the stage is at the end or in the middle, and whether there's an orchestra pit.

Construction on the two-level auditorium began in early 1999, with the opening originally set for last September.

About 6,300 cubic yards of bedrock under Carnegie Hall were removed to create the auditorium, which cost about $72 million, $22 million more than originally planned.

It's designed to be flexible in appearance and programming.

Eighty concerts and 28 educational events are scheduled for the first season, which begins with two programs Sept. 12. Adams will conduct works by Ives, Harrison, Ades and Salonen with a hand-picked ensemble, and the Omar Sosa Octet, a jazz group, will follow. Tickets for the first two concerts are $25.

"We've deliberately done away with the traditional benefit gala to allow the widest possible audience to experience the hall in the first two weeks," Harth said.

World premieres will be given to works by Marc-Andre Dalbavie, Osvaldo Golijov, Adam Guettel, Peter Lieberson, Kaija Saariaho and Steven Stucky. There also will be jazz and world-music concerts, discussions involving architect Frank Gehry and director Peter Sellars, and a performance of Feldman's String Quartet II, which runs up to six hours.

Clear Channel Entertainment has awarded the local Pittsburgh, PA Chevrolet Dealer Group the name-in-title right to the 5,100-capacity Amphitheatre at Station Square. One of the area’s most successful venues and one of 45 venues owned or operated by Clear Channel Entertainment, the amphitheater will now be known as Chevrolet Amphitheatre and will host approximately 25 concerts this year as well as six festivals. Chevrolet Amphitheatre will launch its 15th season with The New Orleans River Festival featuring Buckwheat Zydeco, Terence Simien, Entrain and others on May 30-31.

"It is with great pride that we announce our partnership with the Chevrolet Dealer group," said Rich Engler, CEO, Clear Channel Entertainment Music Pittsburgh. "Chevrolet will receive name-in-title sponsorship rights for the facility formerly known as the Amphitheatre at Station Square, as part of our partnership>"

INDIANAPOLIS (AP) — Mayor Bart Peterson has asked a task force to examine claims that some nightclubs in a northside neighborhood discriminate against blacks by agreeing to limit when rap music can be played.

"I'm concerned because there is a suggestion that not everybody is welcome in Broad Ripple," Peterson said recently. "If that is the perception of some people, then it is an issue we should examine."

The Greater Indianapolis Progress Committee, a civic group formed in the 1960s to promote unity and community growth, will address the concern that some club owners in the Broad Ripple neighborhood made a pact to avoid hip-hop parties on weekends.

The concern began when J.Y.'s, a dance club formerly known as Eden, drew criticism from other bar owners for hosting hip-hop parties on weekends.

Peterson said the task force will investigate whether a ban on hip-hop is observed by club owners, and whether it has "the effect of segregating the community." The committee is expected to begin work within two weeks.

Some neighborhood leaders and business owners have denied accusations of racism but criticized J.Y.'s for its music.

Currently under construction, the shed is scheduled to open in late June. The summer concert lineup includes Lollapalooza, the Dave Matthewsand the Red Hot 4th of July celebration. United Concerts planned to build the venue in 1999, but failed negotiations with potential partner, House of Blues, delayed its opening until this summer.

Fountain opened his first New Orleans club on Bourbon Street in 1960, but has been playing the last 26 years at the Hilton Riverside club, where he held his finale Friday before 400 mostly invited family and friends.

Fountain, 72, said the time was right to move on, noting the tourist business has been down since the Sept. 11, 2001, terrorist attacks.

"I needed a change," Fountain said. "I didn't want it, but I needed it. It's one of those things. Since 9-11, we've seen a lot of people that used to come don't come any more. The club was still making it, but we could see the handwriting on the wall.

"It's been a real good ride, and we've still got a lot of riding to do," he said. "I might get off the motorcycle and ride a little scooter now, but it's still a ride."

Fountain said he'll keep playing at private events, as well as at the French Quarter Festival on April 11 and at the New Orleans Jazz and Heritage Festival on May 4.

Tribe's Amphitheater Project Wins A Round In Court

SEATTLE (AP) — Just three months before the Muckleshoot Indian Tribe intends to open its 20,000-seat concert amphitheater, a federal judge has knocked down what was likely its biggest remaining legal hurdle.

U.S. District Judge John Coughenour of Seattle rejected the contention of a citizen opposition group that federal agencies approved construction of the theater without adequately considering its effect on traffic.

The amphitheater is nearing completion on state Route 164 six miles southeast of Auburn.

Citizens for Safety and Environment, a group of Auburn-Enumclaw area residents, still has other litigation pending against the amphitheater.

But the group mounted its biggest attack on concert traffic congestion that it said would occur not only on crowded, two-lane Route 164, but also on the state Route 18 freeway six miles away.

"This knocks out the most significant issue that (the citizen group) has been focused on, namely traffic, and validates how the whole environmental-review process, and the traffic analysis in particular, was done," Muckleshoot tribal attorney Rob Otsea said yesterday. "The judge did a thorough job of considering and rejecting their complaints on traffic."

David Bricklin, the opposition group's attorney, said the tribe and the concert venue operator, Clear Channel Entertainment, "won a round, but there are a lot more rounds to go.

"We think we've got some (other) very good claims."

Citizens for Safety and Environment has been fighting the project for five years, but completion appears virtually inevitable.

The amphitheater is scheduled to open June 25 with a performance by Heart, the veteran Seattle rock band.

Coughenour, in his 19-page order Thursday, seemed exasperated with the opponents' argument that the U.S. Bureau of Indian Affairs and the Army Corps of Engineers didn't do everything possible to analyze the effects of concert traffic in their 3,000-page environmental impact report.

The judge said the agencies had no obligation under the National Environmental Policy Act "to analyze every factual or statistical permutation that project opponents or independent experts may suggest."

The opponents' argument "and the highly technical nature of (their) arguments reflect a misunderstanding of the court's scope of review," he wrote.

The opposition group still has challenges pending before Coughenour on other aspects of the federal environmental analysis.

They include arguments that the federal agencies failed to give adequate consideration to noise, air quality and other problems that the 30 to 40 events to be staged annually at the amphitheater would cause.

The opponents and the city of Auburn also have filed lawsuits in King Court Superior Court challenging the state Department of Transportation's issuance of a highway-access permit for the amphitheater.

Clear Channel Entertainment, which will operate the amphitheater, is the largest concert promoter, concert-venue operator, billboard owner and radio-station owner in North America.

Tribal officials have raised questions about the citizen opposition group's backing, noting that Bricklin became its attorney shortly after becoming the lawyer for House of Blues, which operates the 20,000-seat Gorge Amphitheatre in Grant County.

The Gorge draws most of its patrons from the Puget Sound area and is the only concert amphitheater in the state.