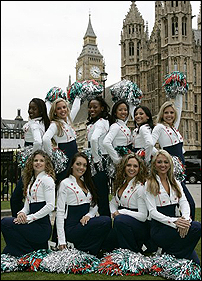 LONDON (CelebrityAccess MediaWire) — This Sunday, the New York Giants and the Miami Dolphins will take their show on the road as they play the first regular-season NFL game held overseas in the league's history.

Planned for a sold-out Wembley Stadium in London, the game is the brainchild of Mark Waller, the head of the league's international operations. If he has his way, every NFL team will be playing at least one game on foreign soil a season within 5 years. Furthermore, he hopes to see a team based on each continent by 2020 and even Superbowls held overseas. NFL comish Roger Goodell was even reported to have floated the idea of a possible Wembley Superbowl.

This isn't the NFL's first flirtation with attempting to woo an international audience. According to the New York Times, in 2005 the San Francisco 49ers took on the Cardinals in Mexico city in front of 103,000 fans, a game which reportedly increased licensing, media and sponsorship sales there by 20 to 25%.

Other endeavors in this vein have met with less enthusiasm. The league held preason games there, starting in 1976, to tepid enthusiasm and the N.F.L. Europa was killed off this year after limping along through infusions of cash and name changes since 1991.

Furthermore, football is an American game and without the cultural exposure to the sport, it might be a more challenging sell. Additionally, how much of a draw for American fans would a Superbowl between The Egyptian Pharaohs and The Brazilian Piranhas, held in Dubai really be.

Other concerns are more pedestrian. Scheduling is an issue as time to recover and train for the next week's game is at a premium. "A number of us, myself included, had trepidation about playing regular-season games over there," the Giants co-owner John Mara

Whatever happens in the future, the London game is already a success, with roughly 88,000 tickets selling out almost instantly. – CelebrityAccess Staff Writers