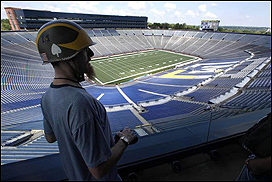 ANN ARBOR (CelebrityAccess MediaWire) — With the start of the football season at the University of Michigan's newly-renovated, 109,901 capacity football stadium (AKA The Big House), patrons will have to contend with the venue's new no-smoking policy.

Starting on Sept. 4th, all designated smoking areas on the stadium's grounds will be banished. The new rules, along with the stadium's existing no-rentry policy, will essentially ban cigarette breaks for patrons during events. Stadium staff will enforce the rules by asking patrons caught smoking to extinguish their tobacco product.

The smoking ban was announced to season ticket holders earlier this year and a spokesman for the university told the Wall Street Journal that the response to the ban has been largely positive.

The state of Michigan is already a largely 'no smoking' state, with bans for most public places, including food and bars, restaurants and shopping centers and the University is planning to ban smoking campus-wide, commencing July 1st.

When asked about the reasoning behind the ban at the stadium, University spokesman Bruce Madej told the WSJ that, "Our new concourses literally cover over 70% of the area inside the gates, and smoking in those areas would create clouds of smoke that would affect those areas and the majority of our concession stands, too." – CelebrityAccess Staff Writers