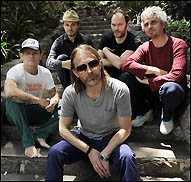 @MusicAlly: Needless to say, Atoms for Peace albums still available to stream in full (unlicensed) on Grooveshark and YouTube

What kind of crazy, fucked up world do we live in where artists are so ignorant, so behind the curve, so out of solutions that they rail against a platform that hasn't gotten any traction anyway?

Furthermore, there's no money in music for anyone but the owners of catalogs because individual acts just can't get enough traction. We can ignore not only Rihanna, but Dave Grohl and Radiohead too. Oh, the fawning press makes it seem like these acts are important and universal, changing the face of American culture, but the truth is if you've heard all three, you're part of a tiny minority paying attention, everybody else is salivating over new smartphones and the software they contain.

Yup, Steve Jobs kills the floppy, and Thom Yorke and Nigel Godrich want to jet us back to the past.

Spotify gives 70% of the revenues to rightsholders. The exact same amount rendered by iTunes. What's the problem? That they pay you over time instead of right now? Afraid that no one will listen to your music in the future? Then you'd better make it really damn good, or create tchotchkes people are dying to own, because the old slap together ten tracks to sell for ten bucks paradigm is so toast, it's stale and in the garbage.

Once upon a time musicians used to lead. Now all they can say is GIVE ME BACK MY PAST! As for saving the future for the new artists… I'd feel better if the new artists created their own paradigm, but instead we've got wannabes too dumb to do anything for themselves. Want to neuter the power of the old gatekeepers, implore acts not to sign with majors. But no, Yorke and Godrich would rather rail against the present, unaware that it's already history. Making Spotify the enemy is akin to the RIAA scapegoating Napster. What happened after they closed Napster? It got WORSE! There was KaZaA and Limewire. Do Yorke and Godrich like Whac-A-Mole that much that they want to fire up the arcade when the game is just about worn out?

Yup, P2P theft is too much trouble. You know what made me stop stealing? Spotify. And for young kids, YouTube. The legal way is much more convenient. This was what was supposed to happen, this was the promise of tech, finally the rightsholders are ahead of the consumers, but in this case they're ahead of the acts too!

How much money did it take to create the cell or cable systems. And with mobile phones, it took almost two decades for people to realize they had to have one. That's progress. You invest now for rewards later. If you think record labels believe in this paradigm you believe Doug Morris owns Sony Music… But Doug's just an employee inured to short term profits like the rest of the corporate titans. As for those vaunted new acts Yorke and Godrich are referencing…they want instant profits too! And are usually so bad they don't deserve any attention.

The truth is, if you're a superstar, there's still plenty of money in music. And superstars are the future, because no one's got time for any less. Just like there's one iTunes Store, one Amazon and one Google, we don't need a plethora of me-too acts, we just need excellence.

Don't musicians get it? If you want to survive in the future, you need solutions.

Want a solution for recorded music? Create a site with everything and get everybody to pay. Cell phone companies don't say you can't call your grandma, but you can't listen to AC/DC and the Beatles and now Atoms For Peace on Spotify. Metallica and the Eagles got the memo, they're now living in the future, but the aforementioned trio and the rest of the Luddites, they believe if they hold their music back they can stem the tide of the future, the same way the lack of AC/DC and Led Zeppelin and the Beatles killed the iTunes Store. Huh? They put a dent in it not a whit!

Who knows, Iovine's MOG/Daisy may replace it. Or the interim might be iTunes Radio, with the public too cheap to pay for access for the moment. But the future is definitely not paying a bunch of money up front for songs you've never heard. Can't get anybody but diehard fans to do that now. And only Yorke and Godrich's diehard fans care about their misguided removal of their music from Spotify. Everybody else shrugs and moves right along, if the news even reaches them.

In Scandinavian countries the lion's share of the revenue IS Spotify, IS streaming. There's nowhere to buy a CD. Is that Spotify's fault? Did Spotify kill the CD, the album and the record shop? No, the public did, by embracing new technology, and now they've all gone to streaming and the crybaby acts keep lamenting the passage of the past the same way buggy whip makers and typewriter constructors did and died.

To quote the great bard Dylan, "He not busy being born is busy dying."

Responses from the industry

One of my biggest frustrations at the moment is the complete lack of leadership from the artist community on the key issues facing our industry. It is a complete void. Those who step up are either painfully wrong and disorganized (as in this case), or go completely unsupported by their peers. There is no artist union. THERE SHOULD BE. Managers and agents keep that from happening because they're afraid of poaching if they let another representative get close to their artist. But artists aren't demanding unionization (or something like it) either. Collaboratively in the live business alone, they could:

They are missing the fact that being an artist in this age also means being an entrepreneur. And good entrepreneurs know when to partner to further their interests. My observation is that most of the bad things about the consumer experience in both recorded and live music have been allowed to persist because the artist community is fragmented, and therefore powerless as a whole. They lose out to established status-quo forces via thousands of one-on-one negotiations, rather than creating leverage by assembling their interests. It also allows larger artists to act with only self interest, rather than using their status to advance the cause of all artists. There are no ties that bind.

I'm obsessed with solving this, because without a collective voice from the artist community, transformative forces will shape the future of their business (and potentially their craft) without them. And history says that is an exploitative environment for artists, and a mediocre-at-best experience for fans.

Testify, brother. It's important to note that overall prerecorded music revenues in Sweden rose by 14% from 2011 to 2012 as Spotify scaled to dominate that market. If Spotify (or whoever wins the streaming battle) were bad for business, then would this be the case? Clearly not. The real problem is that many artists still line up at the record company trough so they can be paid pennies on the dollars that their music earns. Then they blame Spotify rather than their managers or themselves for the iniquities around them. There are other options to taking your music to market with the requisite infrastructure without having to get f****d. Ask Macklemore and Ryan Lewis (speaking of Jimmy Iovine).

I love Thom. I love Nigel. But was blown away when I watched this rant live on Twitter. Can we applaud Spotify / Rdio / Rhapsody for throwing down a ton of money to legally provide music in a modern way that makes sense? We should have done this with Napster. It only took our industry almost 15 years to figure it out!

Artists: Streaming services DO pay. If you have a problem with not getting "paid" by streaming services, complain to the entity you sold your rights to, not to the platforms trying to get ahead of the curve for once. And since you're most likely un-recouped due to gross overspending in the past; let's all try to create and market music in a more effiecent and sustainable manner from here on out.

And how about Jason Isbell ranting against Spotify awhile back?

I figured I'd never hear his new record (Southeastern) as I had purchased others in the past, each with diminishing enthusiasm.

Then I went on Spotify and there it was! I played it , liked it (more than once) and I'll play it again…so he's making a little $$ off me after all.

I may never have heard it otherwise.

this is exactly why i started Audiam. YouTube is the new iTunes.

If someone is using music in a video that is not theirs, the law does not allow anyone to do anything beyond ask YouTube to take down the video.

And then it just pops up tomorrow.

However, what can be done is telling YouTube its OK to place an ad on that person's video. And if that happens, the "cash" is paid by the advertiser, not the user or YouTube.

In other words, we now have a world where music fans can legally — and for free —create videos containing music they love, upload these videos to YouTube, have YouTube license the music the videos and then have advertisers pay the artists and copyright holders for the use.

YouTube can become kickstarter. Please use my music in your videos, cover my songs, to help me raise money.

Even a single song by one artist can be used by hundreds, thousands or tens of thousands of fans. Each video is its own creation with its own potential to become a "hit,” from lyric videos to "unofficial" music videos to music in the background as the wedding party dances. Each work of art has the potential to become popular, and with each view, money can be generated and the artist can be promoted

Tell them to use the music.

We WANT people to use the music in their YouTube videos. And when we find those videos, we tell YouTube its OK to sell ads into them.

What existed before, continues to exist, only now they generate revenue