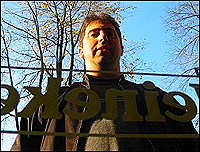 (CelebrityAccess MediaWire) — Phil Egenthal has joined Brooklyn-based booking agency AM Only as an agent. Egenthal comes to AM Only from West Palm Beach, Florida-based agency Fantasma Tours International.

Egenthal began his love affair with the live music world as a production assistant and writer at VH1, working on such shows at "Storytellers," "Hard Rock Live" and "Legends." After being promoted to Associate Producer for specials such as "SNL 25: the Musical History of Saturday Night Live," he realized his passion was concerts. Soon after, Egenthal was offered an assistant position at Renaissance Entertainment, which later became Evolution Talent. Quickly learning under Sam Kirby, Jon Podell and David Zedeck, Egenthal was promoted to agent, where he began to assemble his own roster. He moved to Fantasma after Evolution closed in the summer of 2004.

Phil will be joined at AM Only by a roster of clients including Assassins, Audio Bullys, Benevento / Russo Duo, Darren Emerson, DJ Harry, Junior Sanchez, The Low Life, the New Deal, Supagroup, Supreme Beings of Leisure, Tim Deluxe and VHS OR BETA.

Egenthal says of his new employer, "AM Only, as a company, represents exactly what every artist should be looking for – a perfect blend of sophistication, intelligence and forward thinking. I look forward to helping to expand its established reputation of integrity."

AM Only president Paul Morris says of Egenthal, "I am delighted to welcome Phil and his roster into the AM Only family. His obvious passion and commitment to his artists and keen sense of what's next will be an invaluable asset to us as we move forward." –by CelebrityAccess Staff Writers